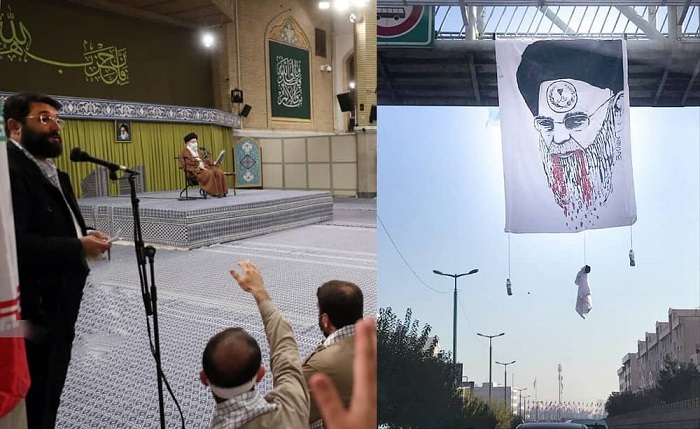 For the seventh time since the start of the nationwide Iranian uprising in September, the clerical regime’s Supreme Leader Ali Khamenei has rushed to the scene to boost the morale of its demoralized Basij forces, who have reached an impasse in the face of the people’s unwavering determination to see a regime change.

To control his regime’s escalating infighting, Khamenei had to resort to worn-out rhetoric, such as portraying protesters as “foreign” agents and downplaying what many consider the country’s democratic revolution. It’s worth noting that he boasted last week about putting an end to the uprising amid nationwide protests chanting “Death to Khamenei.”

As a result, many observers see Khamenei’s contradictory remarks on Saturday as a clear sign of a desperate dictator seeking a way out of a deadly impasse.

Khamenei, on the other hand, has settled his score with the rival faction, the so-called reformists, who have been urging him to yield to domestic and international pressure, give them a share of power, and acknowledge “hearing people.” This faction, which has been involved in the regime’s crimes against people for years, has been attempting to blame “rogue officials” for the regime’s violence in the recent uprising and the country’s problems while portraying a dictator like Khamenei as a “caring father for the nation.”

On November 16, the state-run Etemad, a so-called “moderate” daily, wrote, “You should act as a caring father to solve problems between the ruling system and the people.”

“They write and state unequivocally that we should listen to the voice of the people and settle our differences with the United States. What exactly does this mean? We must pay ransom to the great Satan, and once we do, they will demand more,” Khamenei said in his speech.

He also stated that Tehran is not willing to back down from its nuclear ambitions, demonstrating once again that Western governments’ efforts to resurrect the deeply flawed 2015 Iran nuclear deal have been futile and pointless.

In a nutshell, Khamenei’s remarks emphasized that Iran’s ruling theocracy is at a standstill in relation to the current revolution and that even “one step” backward could result in the regime’s immediate demise.  Khamenei is now facing a revolution, with the MEK’s Resistance Units network playing a key role in organizing these protests, as acknowledged by regime officials. More violence is his response to the nationwide uprising.

The outcome of the uprising is that the Velayat-e Faqih regime’s overthrow is inevitable. The suffering and sacrifice of the Iranian people have turned into a weapon firing at Khamenei and his oppressive rule and will eventually destroy the regime.#IranRevolution pic.twitter.com/QcojhmPXjE

As Khamenei vowed to continue his killing spree, the international community must respond accordingly. Despite the regime’s efforts to quell the protests, the Iranian people have persisted. The world’s recognition of the people’s right to self-defense is the only meaningful support for the Iranian revolution. This would undoubtedly weaken Khamenei’s oppressive apparatus.