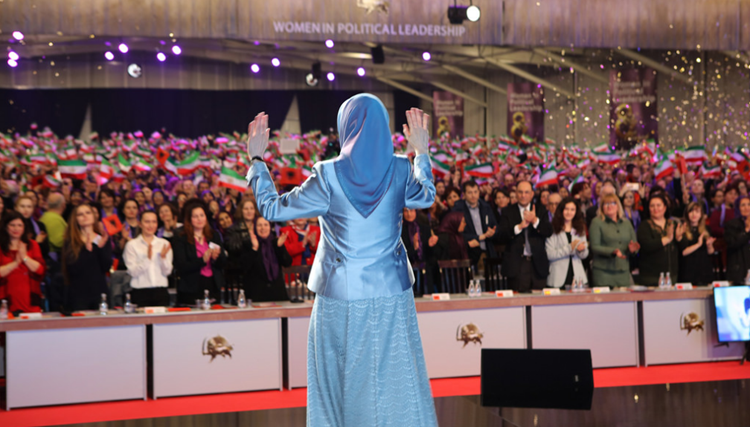 For International Women’s Day, a conference entitled “Women in Political Leadership” was held in Tirana in Albania.

In attendance were activists and political leaders from all over the world. Many of the speakers spoke about the threat of the mullahs’ regime in Iran.

President-elect of the National council of Resistance of Iran (NCRI), Maryam Rajavi, spoke about her wishes for equality and the bravery of the women in Iran including those who are currently imprisoned for political reasons. She also praised all freedom loving people who are working towards equality in Iran.

My fellow countrywomen longing for freedom and equality in Iran,

Fellow courageous women who are resisting as political prisoners,

Freedom-loving women and men of the equality movement,

I congratulate you all on International Women’s Day!

I would also like to salute the thousands of brave women who have been tortured or executed by the clerical regime in the course of their struggle against the velayat-e faqih.

I am delighted that this year, we are observing the International Women’s Day in the presence of a group from the 1,000 pioneering women of Ashraf, whose protection against the attacks of the clerical regime used to comprise part of our sisters’ efforts and struggle around the world in the previous years.

The PMOI’s safe and secure relocation from Camp Liberty and out of Iraq, which was done collectively as an organization, was a heavy blow to the mullahs’ regime. As demonstrated in their fierce missile attacks, they wanted to destroy the pivotal force of the alternative to their regime. But they failed. That said, I would like to extend my earnest appreciations to the government and people of Albania for their great initiative. They thus presented Albania as an example of freedom and humanity in today’s world.

I must also sincerely appreciate the honorable and inspiring women from around the world, a number of whom are present here today, who lent their invaluable support and assistance to the women of Ashraf.”

Rajavi also pointed out that women are very often the target of the regime’s misogyny, highlighting that the regime is clearly threatened by women.

She said: “The imposition of the mandatory veil on women and flagrant discriminations against them in educational and vocational arenas are only efforts to enchain women; otherwise the mullahs would not be able to preserve their power and they will be toppled by these women and with the efforts of the general Iranian populace.”

Rajavi pointed out that women have a pivotal role for the future: “The point I would like to make is that for decades, women’s struggles and the International Women’s Day have focused on the elimination of inequality and violence against women as their objective. Today, however, women have a mission beyond these goals, of saving humanity from fundamentalism and terrorism.”