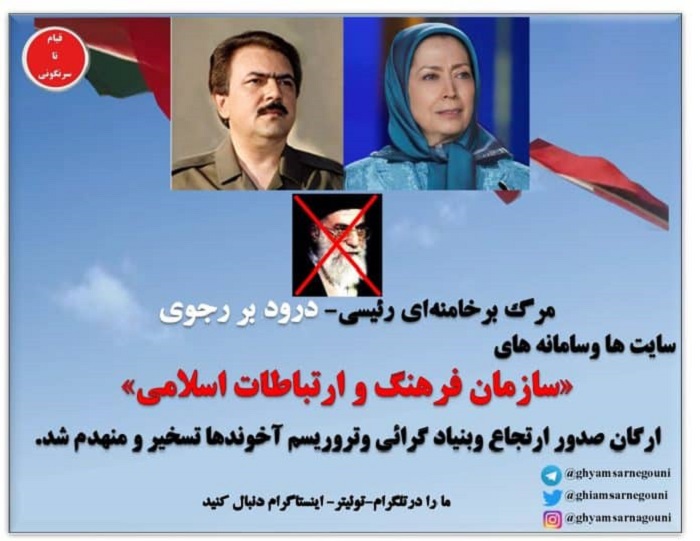 On July 3, 2022, rebellious cyber activists launched a major cyber offensive against the Iranian regime’s Islamic & Relations Organization (ICRO), a subsidiary organization of the Ministry of Culture and Islamic Guidance responsible for spreading the religious dictatorship’s regressive and medieval mindset throughout 70 countries and recruiting extremist elements for terrorist purposes.

Six websites, 44 servers, 580 computers, and two automation servers were all destroyed, according to Ghiam Sarnegouni [Uprising till Overthrow], a group of cyber-activists who launched the attack. The group also defaced 15 ICRO websites with images of Mr. Massoud Rajavi, the Iranian Resistance Leader, and Mrs. Maryam Rajavi, the President-elect of Iran’s National Council of Resistance of Iran (NCRI).

Ghiam Sarnegouni also acquired a number of databases, including 230,000 classified documents, unreleased presidential directives, and announcements, the names of ICRO front companies abroad, proof of money laundering, floor plans of the ICRO staff building, a network of the organization’s cross-border spies, as well as a list of the monthly salaries of these individuals.

The ICRO was formally established in 1995 with the mandate to assemble all activities aimed at exporting extremism to various nations, particularly Muslim nations, as well as to advance and spread the Velayat-e Faqih (Supremacy of Clerics). This group plays a crucial role in forming terrorist organizations and enlisting fundamentalist and extremist elements.

Additionally, by creating “fake oppositions,” the Iranian regime made sure that it had a negative influence on the political elites and internal affairs of Muslim nations. There is evidence that the mullahs have supported Muslim minorities in non-Muslim nations in Asia and Africa to fund and organize a number of so-called opposition groups.

Numerous Muslim asylum seekers in western nations were also recruited by the organization, which then trained and put them in sleeper cells. In this context, the ICRO established a vast network stretching from the United States to many European and Middle Eastern countries, jeopardizing peace and security.

In order to spread false information about the Iranian opposition groups the People’s Mojahedin of Iran (PMOI/MEK) and the NCRI, the mullahs also made use of the ICRO. Luisa Hommerich, a “journalist” for Der Spiegel, published a “feature” in February 2019 that was critical of the MEK in Albania and repeated false narratives about the opposition put forth by the Ministry of Intelligence and Security.

A German court ruled in favour of the Iranian opposition in a long-running lawsuit, ordering Der Spiegel to remove the slanders or pay a massive fine to the plaintiffs. Notably, Mrs. Hommerich was one of the “journalists” who supported the ICRO.

The ICRO had established a purported cultural foundation called Saadi in Tirana in addition to Tehran’s disinformation campaign against the MEK in Albania. The mullahs used this foundation to enlist neighborhood thugs to attack MEK members, and they were instrumental in the March 2018 bombing attempt against a rally of dissidents that was thwarted.

Following the expulsion of several Iranian diplomat-terrorists, including the ambassador and his deputy, the Albanian Minister of Education, Sports, and Youth issued an order to immediately close the Saadi Foundation there. Consequently, the ICRO has a direct hand in terrorist activities. The organization organizes religious events in various nations while working with the designated Islamic Revolutionary Guard Corps and its terrorist arm, the Quds Force, to point out extremist elements to Quds Force commanders.

“The organization has not released its budget for the current fiscal year. However, according to the MEK, the official budget for the previous year (March 2020 to March 2021) was 4,150 billion rials or about $100 million at the official exchange rate in 2021.