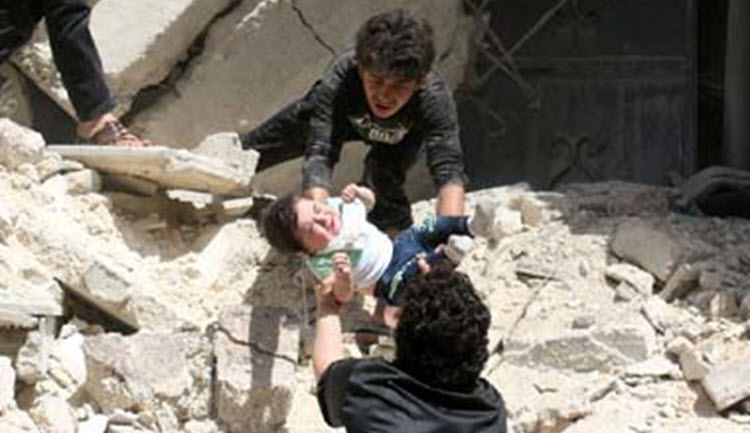 Mrs. Rajavi, President-elect of the Iranian Resistance, in a statement on the National Council of Resistance of Iran’s (NCRI) website, has called the inaction in Aleppo a “great tragedy”. She said that the “Savagery of the mullahs and their allies and mercenaries indicates their failure in saving the Syrian dictator”.

The brutal and vicious attack of Aleppo along with the cruel massacre of the Syrian people including women and children, by Bashar Assad, the antihuman Iranian regime and their allies and mercenaries, she said, is an “unparalleled war crime” and “a great tragedy of the century that has hurt the conscience of contemporary mankind”.

Mrs. Rajavi said that the perseverance of the Syrian people and opposition, especially those in Aleppo, should be praised for being a model that will never be forgotten. The inaction in face of this tragedy, she said, “blemishes the record of the international community”.

She highlighted that the expansion and growth of Daesh in the region, the wave of refugees and the recent spate of terrorism in Europe are all “direct consequences of the crimes of the past five years by the Syrian dictator and the Iranian regime and its mercenaries in the region going unpunished”.

Mrs. Rajavi said that the unparalleled barbarity we have been seeing in current times, in Aleppo in particular, demonstrates the “frustration of the Iranian regime and its allies in facing up to the Syrian revolution and the Free Syrian Army and its dismal failure to save Assad’s rule”. She added that the last five years show that the Iranian regime’s military mobilisation, as well as that of their allies, against the will of the Syrian people and the opposition “will surely end in a humiliating defeat”.

Khamenei was forced, for the first time since the Iran-Iraq war, to send army units under his command to the Syrian quagmire in an aggressive war after the military deployment of the Iranian regime were defeated in Syria and veteran Revolutionary Guards, Hezbollah, and the regime’s many mercenaries were unable to save Assad and a great number of Revolutionary Guards’ casualties shook their moral. “To prop up the wrecked moral of the regime’s Revolutionary Guards and mercenaries, on May 2, the puppet parliament of this regime ratified a bill that grants Iranian citizenship to the families of foreigners killed in Syria.”

Mrs. Rajavi added that the regime is preventing official and public burial ceremonies for army casualties because they are concealing not just the scale of casualties, but also the degree of military participation under the command of its Supreme Leader. This is all because the leaders of the regime are extremely worried about the army losing morale and a “wave of dissatisfaction and disobedience in its ranks”.