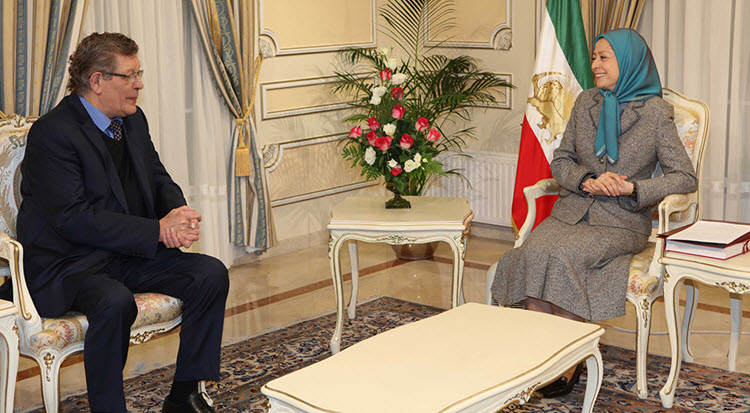 The National Council of Resistance of Iran (NCRI) has published an article about the meeting between Gérard Deprez MEP President of the Friends of a Free Iran (FOFI) at the European Parliament and Maryam Rajavi the president-elect of the Iranian Resistance.

They met at Mrs. Rajavi’s residence in Auvers-sur-Oise on 11th November 2016 along with Mr. Deprez’s parliamentary and press assistants.

During the meeting, Mr. Deprez offered his congratulations to Mrs. Rajavi for the success of the Iranian Resistance and the People’s Mojahedin of Iran (PMOI/MEK) in managing to relocate the remaining Camp Liberty residents to other places in Europe.

He emphasised that Friends of a Free Iran has the support of more than 300 European Parliament members from all political groups. He reiterated the group’s past support for ensuring the security and safety of the Iranian people’s freedom fighters. He expressed his relief that the “selfless children of the people of Iran” have finally been relocated to somewhere they can be safe.

Mr. Deprez told Mrs. Rajavi that she has the support of many MEPs. He said that there are so many people who are wanting the people behind the 1988 massacre of political prisoners to be tried and punished for the role they played. He also said that many people in European Parliament are rooting for democratic change in Iran.

The NCRI said: “Maryam Rajavi expressed her gratitude to the President of the Friends of a Free Iran and the group’s members. She stressed that the European Parliament should heed the deteriorating situation of human rights in Iran as well as the expansion of protests across the country and condition every step to expand trade relations with Iran on end to executions. She pointed out that every investment on Iran’s clerical regime is not going to be productive as the regime faces irremediable political and economic crises and the Iranian people’s detestation and profound discontent.”