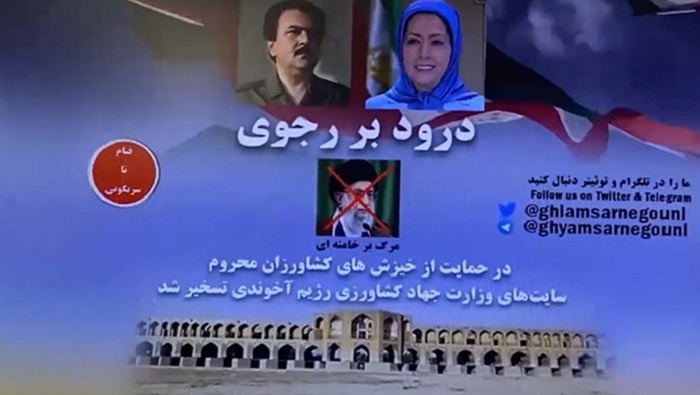 More than 100 servers and computers, dozens of portals and databases, 37 sites, and 12 internal portals of the Ministry of Agriculture Jihad were disrupted and destroyed on Monday morning, April 25, 2022. On the homepage of the Ministry of Agriculture Jihad, there were pictures of the Iranian Resistance’s leadership with the slogan “Viva Rajavi,” as well as defaced pictures of Khamenei with the slogan “Death to Khamenei.”

“Major cyberattack on the Ministry of Agriculture Jihad’s websites, portals, and databases is a campaign and a response to the suppression of Iran’s oppressed farmers, especially in Isfahan, and breaks the wall of repression,” the @Ghyamsarnegouny telegram channel announced.

The regime’s repressive forces set fire to Isfahan farmers’ tents in the dry bed of the Zayandehroud River last December and opened fire on the deprived farmers, blinding many of them with pellet guns.

On January 27, “Resistance Units,” or supporters of the People’s Mojahedin of Iran (PMOI/MEK), shut down over 400 radio and television servers and disrupted 27 regime television and radio networks. Some of these networks broadcasted images of resistance leaders Mr. Massoud Rajavi and Mrs. Maryam Rajavi, as well as slogans such as “Death to Khamenei,” “Hail to Rajavi,” and a short excerpt from one of Mr. Rajavi’s speeches.

The websites affiliated with the regime’s Ministry of Culture and Islamic Guidance were blocked in the early morning hours of March 14 by supporters of the MEK. On the main pages of these websites, photos of Massoud and Maryam Rajavi with the slogan “Long live Rajavi” and a photo of Khamenei crossed out with the slogan “Down with Khamenei” were posted.

The Ministry of Culture and Islamic Guidance immediately sent a status report via the internal automation network to the Ministers of Intelligence and Interior, the Secretary of the Supreme National Security Council, the IRGC Commander, the Revolutionary Guards Intelligence Organization, and ten other ministers and 30 other senior regime officials.

Since Early February in dozens of major shopping malls, historic popular sites, and major public places throughout Iran including in Tehran, Shahriar (a suburb of Tehran), Mashhad, Tabriz, Rasht, Chalus, Lahijan, Langerud, and Neyshabour, the “Resistance Units” have broadcast by loudspeakers chants of “Death to Khamenei, viva Rajavi,” “No to the Shah, no to the mullahs, viva democracy,” “Raisi is the henchman of the 1988 massacre,” “Death to Khamenei, damned be Khomeini,” and called for the overthrow of the clerical dictatorship.

“The official network of hypocrites, the regime’s pejorative term for the MEK, and supporters of Massoud Rajavi and Maryam Rajavi announced on their television that they had attacked the Ministry of Agriculture Jihad, imagining to have inflicted a blow against the state,” the state-run Seraj news reported on April 25. The hypocrites have begun their attacks on powerful ministries because they can’t stand the ministry’s fight against the mafia.”

“Recently, the Supreme Leader’s website featured an interview with Minister of Agriculture Jihad Dr. Seyyed Javad Sadati Nejad, which was widely covered both inside and outside the country, prompting hypocrites to attack the Ministry of Agriculture Jihad’s website,” Seraj continued. “The fact that the hypocrites regard the attacks as a success gives hope that the ministry is on the right track in combating corruption and resolving agricultural issues.”