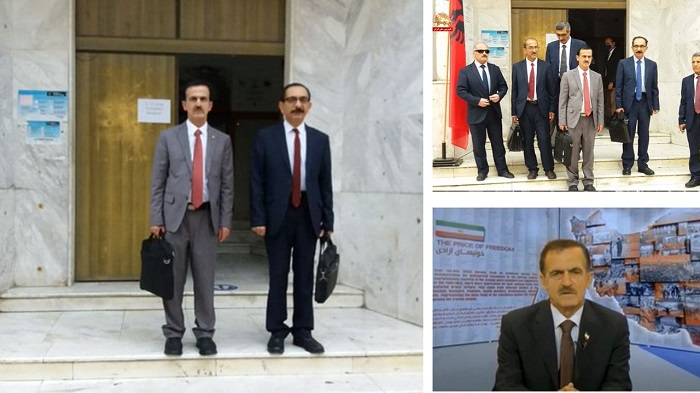 The prosecution of Hamid Noury, an Iranian prison officer accused of torturing inmates in the Gohardasht prison (Karaj) and taking part in the 1988 massacre of thousands of political prisoners, resumed on Friday in the District Court of Durres, Albania. Noury is currently on trial in a courtroom where many of his victims are testifying about how he and other regime officials tortured and killed detainees.

The trial’s first 34 sessions were placed in Stockholm’s District Court. The judge agreed to move the trial to Albania, where hundreds of members of the People’s Mojahedin of Iran (PMOI / MEK Iran)live, at the request of the prosecutors. The massacre of 1988, in which the state killed over 30,000 political detainees, mostly targeted MEK members.

Asghar Mehdizadeh, a former political figure, testified on Friday about the horrors committed in Iran’s brutal prisons. Mehdizadeh was imprisoned for 13 years in several prisons, including Evin and Gohardasht, for supporting the MEK. He was one of the first people to see the massacre in 1988.

Noury, one of the senior prison guards in Gohardasht, tortured political inmates, and Mehdizadeh saw it first-hand.

“One day in the winter we saw [Hamid Noury] from the window. He was taking a number of the younger inmates to the courtyard, forcing them to crawl on the ground in that cold. When I saw this scene along with a number of other prisoners from the window, we saw [Noury] and a prison guard named ‘Majid Lore’ punishing those young inmates,” he said.

As the end of July approached, the regime began the long-awaited process of removing all political dissidents from imprisonment.

“The prison guards led us to the courtyard on July 27, 1988. They ordered us all to put on blindfolds and leave our sections after we returned… I noticed Hamid Abbasi [Noury] sitting behind a small desk, and as I approached him, he began questioning me. My sentence was the subject of one of the questions. When I told him I was a MEK supporter, he said nothing, unlike in the past when he would curse and hit me,” Mehdizadeh recalled. “When we returned to our section of the prison and started to the others, we were all asking questions about why were they treating us like this?”

The inmates were herded into a large room. Lashgari announced the names of 13 inmates and led them away. They included Mehdizadeh.

“Hamid Abbasi [Noury] took us to the ‘Death Corridor’ when we went out,” Mehdizadeh claimed.

In Friday's session, Asghar Mehdizadeh, a former political prisoner who spent 13 years in #Iran’s prisons, testifies on the atrocities that took place in the regime's horrific prisons.#1988Massacre#ProsecuteRaisiNOW

Raisi and Pourmohammadi were among the commission’s members.

Prisoners were kept waiting in the Death Corridor until it was their turn to encounter the Death Commission, a panel responsible for selecting which prisoners would live and which would be sent to the gallows. Ebrahim Raisi, the current regime’s president, and Mostafa Pourmohammadi, the former justice minister, were among the commission’s members. Political detainees were summoned one by one by the Death Commission, who decided their destiny in trials that lasted only a few minutes. Those who refused to denounce their support for the MEK were sent to the gallows right away.

The Death Commission was acting on the orders of Ruhollah Khomeini, the regime’s supreme commander, who issued a fatwa declaring anyone who continues to assist the MEK to be an enemy of God and deserving of death.

Mehdizadeh also mentioned the trauma he had following the massacre in 1988 in his statement.

“I was brought to the prison clinic in June 1989 for surgery, and then I was taken to a room where patients were hospitalized. The next day, I noticed five or six new persons in the courthouse. Despite the discomfort in my leg, I sat down near the window and continued to shout for them.

“They didn’t respond,” he added. “I later learned that they had become mentally unstable [as a result of the 1988 massacre].” They were taken away, and a large group of people showed up at the courthouse. When I shouted out to him, one of the inmates, Jafar, stepped up to the window and introduced himself.

Several witnesses to the 1988 massacre and families of the victims gathered in front of the Durres court and spoke to the press about the Iranian regime’s crimes against MEK members and dissidents while the trial was underway.

The1988 massacre has been called a war crime against humanity

MEK members in Ashraf 3 staged a memorial for the victims of the 1988 massacre at the same time. Many political prisoners talked about and related experiences of horrors committed in Iran’s jails during this ceremony. Hundreds of former political prisoners are currently housed at Ashraf 3, and many of them were willing to testify before the Stockholm court. Only a few people were accepted as plaintiffs in the case due to time constraints.

Meanwhile, a huge gathering of MEK sympathizers attended a protest march in front of the court in Stockholm, where Noury and his lawyers are attending the trial via video conference. The activists want a wider tribunal that would include other offenders and organizers of the 1988 massacre, like regime president Ebrahim Raisi and supreme leader Ali Khamenei.

The massacre in 1988 has been called a war crime and a crime against humanity. It is also referred to as “genocide” by legal experts, and it should be investigated by international tribunals.