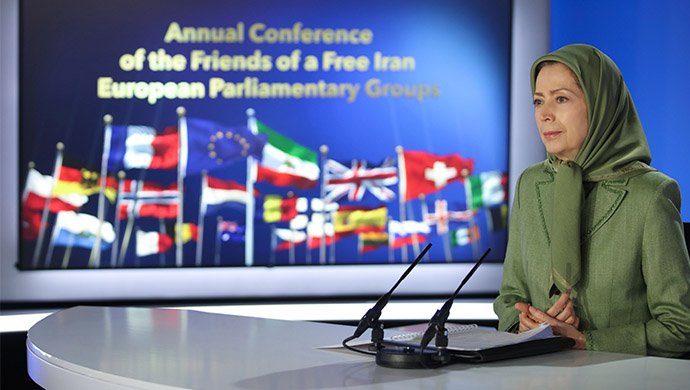 Members of Friends of a Free Iran (FOFI) Committees from throughout Europe met online on the 43rd anniversary of Iran’s 1979 Revolution to debate the situation in Iran and the challenges presented by the mullahs’ dictatorship to the region world. Mrs. Maryam Rajavi, the president-elect of the National Council of Resistance of Iran (NCRI), as well as lawmakers and politicians from the United Kingdom, Germany, France, Italy, Switzerland, Finland, Norway, the Netherlands, Belgium, Spain, Portugal, Ireland, Romania, Malta, Lithuania, Slovenia, Poland, and San Marino, attended the conference.

Mrs. Rajavi spoke at the conference about the regime’s situation, the crises it is facing, and the realities of Iranian society, which have been manifested in waves of widespread protests. Mrs. Rajavi emphasized that the regime has attempted to avert this deadly instability in every manner possible, including through its dangerous atomic bomb-making program and bullying of the international community during nuclear discussions and the signing of the 2015 nuclear deal (JCPOA).

“With unwarranted concessions, the JCPOA suited the mullahs’ political and financial requirements. The regime, on the other hand, never gave up the pursuit of an atomic bomb because it needs one to ensure its rotten survival. Mrs. Rajavi stated that handing up the bomb would be in violation of all security standards.

Mrs. Rajavi further stated that the regime’s desperation against the angered public is evidenced by Ebrahim Raisi’s presidency, who is infamous for the execution and murder of dissidents. “Raisi is the most visible indicator of the regime’s downfall phase. “The unique character of this era is that, regardless of whether the regime abandons or maintains its nuclear program, it will face a wave of uprisings in which the [People’s Mojahedin of Iran (PMOI / MEK Iran)] MEK and its Resistance Units will play a role,” she said, adding that Raisi has proven to be the most powerless government in the mullahs’ four-decade rule.

Iran’s dictatorship, according to former Italian Foreign Minister Giulio Terzi, is “the world’s number one state terror.”It’s not merely the number one terrorist state because it’s been a terrorist state for the last three, four, or five years. It’s been a terrorist state since its inception.” Terrorist action has always been a major aspect of its foreign, security, and defense policies, with terrorist activities across the board in the region against the opposition, as well as throughout the world in Latin America, North America, and Europe,” he stated.

“As you are aware, governments’ positions on the Iranian regime diverge significantly from those of parliaments. “We have parliamentary committees for freedom in various parliaments,” remarked Mr. Alejo Vidal Quadras, former Vice President of the European Parliament. “Many of our members desire a free Iran and vehemently oppose this religious theocratic, tyrannical tyranny.” Governments, on the other hand, act in a very different way. They want appeasement, dialogue, and negotiation, but they’re wasting their time because they’ve been doing this with the Iranian regime for decades, and the outcome has been proxy wars, human rights violations inside Iran, executions, and terrorism, as we all know. As a result, it is apparent that appeasement and bargaining are ineffective.”The FOFI committees’ purpose, according to Mr. Vidal Quadras, is to urge for a shift in policy toward Iran’s regime.

Now the question is whether the new political arrangement can restore the mullahs’ battered power, and bring it future of stability &strength. Or conversely, has this new arrangement exacerbated the regime’s weakness and instability? #EUTime4FirmIranPolicyhttps://t.co/NdixqMziUE pic.twitter.com/Thz8hs2tYr

The FOFI representatives expressed their support for “the struggle of the Iranian people and Resistance to overthrow the ruling religious dictatorship and for the establishment of a democratic and pluralistic republic based on the separation of religion and state, which we believe would serve regional and global peace and stability” in their statement.

The statement’s signatories urged European national governments and the European Union to take a firm and decisive stance toward the Iranian regime, condemning the regime’s four decades of crimes against humanity and genocide, and taking the lead in referring to the regime’s crimes to the UN Security Council.