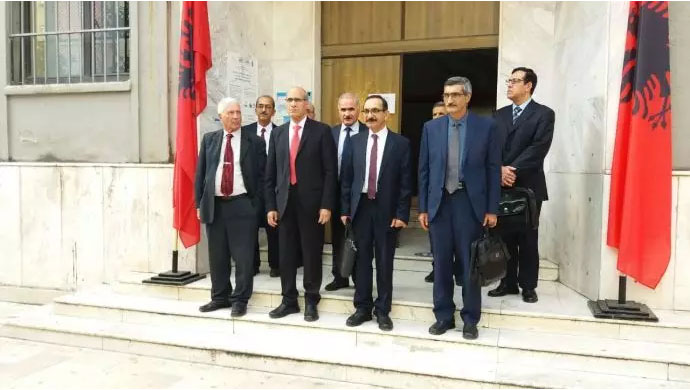 On Tuesday, the trial of Hamid Noury began its thirty-ninth session, and an Iranian prison supervisor was charged with complicity in the 1988 massacre of political inmates. At the time of the massacre, Noury was imprisoned in Gohardasht. In 2019, he was imprisoned in Sweden.

The final five sessions of Noury’s trial have been placed in Albania. The trial was relocated to Albania, where hundreds of members of the People’s Mojahedin of Iran (PMOI / MEK Iran) live, after 34 sessions in Sweden, at the request of the prosecutors. MEK members were principally targeted in the 1988 killing of around 30,000 political prisoners across Iran.

Former political prisoner and MEK member Mahmoud Royaei testified in Durres District Court on Tuesday. Royaei was sentenced to ten years in jail. He was a survivor of the 1988 massacre.

on Tuesday. Royaei was sentenced to ten years in jail. He was a survivor of the 1988 massacre.

“In March 1988, a group of detainees was moved from Kermanshah to Gohardasht. “We didn’t know why the authorities did it at the time, but we later learned that it was part of a plan to classify the prisoners, a plan carried out by Davoud Lashgari, Mohammad Moghiseh, and Hamid Abbasi [Noury] in February 1988,” he said, emphasizing that the regime had been planning the execution for months.

“They enquired as to the nature of their allegation. As soon as they confessed, they were MEK supporters, the guards severely assaulted them. They were returned bruised and bloodied a few hours later. The guards threatened, “We’ll come back for you on Saturday,”

“We knew the first executions were from Karaj prisoners because [Ebrahim] Raisi was the prosecutor of Karaj and personally knew them,” Royaei alleged, referring to the regime’s current president, Ebrahim Raisi, who had a key role in the 1988 massacre.

Raisi was a member of the infamous “Death Commission,” which tracked down and executed hardline MEK sympathizers in kangaroo trials. These committees were enforcing a fatwa given by the regime’s then-Supreme Leader, Ruhollah Khomeini, which called for the execution of all MEK members.

Raisi was a member of the “Death Commission” that decided the fate of each political prisoner. Those who did not disavow their support for the MEK would be sent to the gallows.
The Death Commission was acting on direct orders from regime supreme leader Ruhollah Khomeini. pic.twitter.com/TKiPoJAezX

When he was summoned by the execution commission, Eshragi handed him a piece of paper and told him to write down his qualifications and ideas on the MEK. “I added four or five lines, saying I have no opinion about the MEK and that if I am released, I will not work with any party or group,” Royaei revealed.

There, Royaei met Hamid Noury, also known as Abbasi. “I was less than a meter away from Hamid Abbasi.” I didn’t need to see his face to recognize him. I could see a few meters through the blindfold. Royaei added, “I knew who each pair of pants and shoes belonged to,” “The guards were all dressed in military uniforms. On the other side, Nasserian and Hamid Abbasi were dressed casually.”

On the eve of Hamid Noury’s trial, families of regime victims and MEK members gathered outside the Durres District Court. They went to the press to tell their stories, drawing attention to the regime’s four decades of human rights violations. MEK members in Ashraf 3 also held a memorial service for those who died in the liberation struggle over the last four decades.

Iranians, MEK friends, and family members of victims of the mullahs’ rule gathered in Sweden on Tuesday for a march. Since the start of Noury’s trial, MEK supporters have been protesting in Sweden. On Tuesday, MEK supporters vowed to continue their campaign, carrying images of the 1988 massacre martyrs.

Iran: “I was one of Those who Shot People… Who is Going to put us on Trial” says Iranian MP, Hassan Norouzi