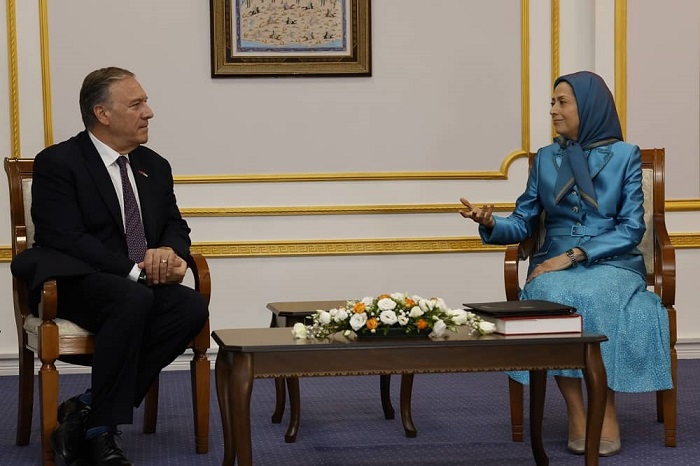 On Monday, May 16, Mike Pompeo, the 70th United States Secretary of State, visited Ashraf 3, which is home to thousands of members of the People’s Mojahedin of Iran (PMOI/MEK) in Manz, Albania. Secretary of State Mike Pompeo met with Maryam Rajavi, President-elect of the National Council of Resistance of Iran (NCRI).

“I’d like to congratulate President-elect Maryam Rajavi on her election. The National Council of Resistance of Iran is laying the groundwork for a free, sovereign, and democratic republic in Iran under her leadership,” Secretary Pompeo said in his speech at Ashraf 3.

“The lack of political support for the organized opposition has been a serious missing factor in US policy toward Iran,” Secretary Pompeo said. “The regime in Tehran went to the extreme to massacre 30,000 political prisoners, whose main targets and a majority of victims were the MEK.

Now, regardless of who is in the White House, the US administration must reach out to the Iranian Resistance and take advantage of its vast capabilities in order to correct the Iran policy. Ashraf 3 is one such place to focus on,” he continued.

“The butcher who orchestrated the 1988 massacre, Ebrahim Raisi, is now President… The lowest voter turnout since 1979, indicates a complete rejection of the regime and its candidate. It was, in fact, a regime boycott – and the regime is well aware of it. The regime is clearly at its weakest point in decades,” Secretary Pompeo said, emphasizing that the mullahs’ regime is only in power because of an iron fist and lacks popular support.

“Raisi has already failed. “He has failed to put down uprisings in Iran or to break the noble spirit of dissent among Iranians,” Pompeo said.

“In the end, the Iranian people will have a secular, democratic, non-nuclear Republic. I pray that this day will come soon and with the support of Iranians living all around the world – and those who resist from within — that day will come sooner. He concluded, “I am committed to this cause, and I know you all are as well.”

Madam Rajavi greeted Secretary of State Pompeo and expressed her appreciation for his visit to the Iranian opposition in Ashraf 3. She emphasized the Iranian Resistance’s and the Iranian people’s determination to work together to put an end to the mullahs’ four decades of human rights violations, warmongering, terrorism, and destruction in Iran, the Middle East, and elsewhere.

“For a while, the mullahs tried to portray Iraq as the enemy. Then, they tried to portray the United States as the enemy. But the people of Iran and the MEK say that our enemy is in Iran. The mullahs said the MEK were terrorists, a cult, and the enemies of God. They claimed the MEK did not have any base of support in Iran. There are many similar and baseless allegations,” NCRI’s President-elect explained.

She reiterated the Iranian Resistance’s positions and expectations from the international community as she concluded her remarks at the MEK gathering at Ashraf 3.

“Today, we reiterate the importance of not delaying. We assert that the nuclear mullahs’ evil can and must be eradicated from Iran, the Middle East, and the rest of the world.”