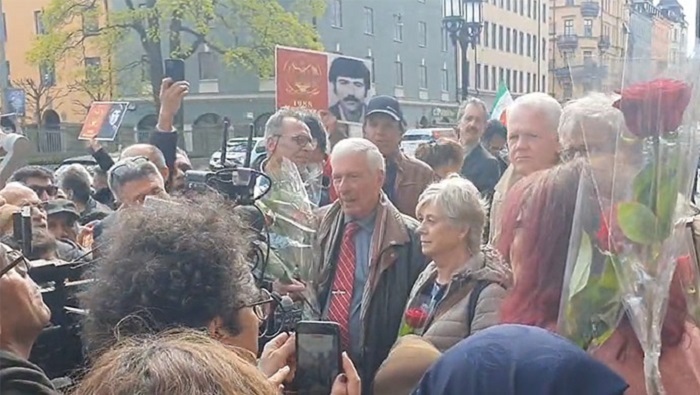 Kenneth Lewis, the lawyer for plaintiffs in the Hamid Noury case from the People’s Mojahedin of Iran (PMOI/MEK), presented his closing arguments in a Stockholm, Sweden, court on Monday, May 2. Noury, one of the perpetrators of the 1988 massacre of Iranian political prisoners, is being tried for crimes against humanity.

During the court hearing, Lewis backed up the arguments made by the prosecutors and other plaintiffs’ attorneys that Noury was guilty of crimes in 1988. He also presented the court with new information about the case. He began by giving a brief history of the PMOI/MEK and its fight against the Shah dictatorship and for Iranian freedom.

Kenneth Lewis provided historical context for the demonstration in Tehran on June 20, 1981, in which half a million people poured into the streets and were gunned down by the regime’s Revolutionary Guards (IRGC). Following the execution of a number of young PMOI/MEK members following the demonstration, regime authorities published photographs of the victims in state newspapers and appealed to anyone who knows who they are to contact the regime’s public prosecutor’s office.

Lewis detailed the mullahs’ crimes against PMOI/MEK members and supporters around the world, demonstrating that this regime views the PMOI/MEK as its main historical, political, and ideological foe. The Iranian regime is hell-bent on annihilating the PMOI/MEK, and the arrests, tortures, and executions are all part of a policy that began with Khomeini’s rise to power, continued through his 1988 fatwa, and continues to this day.

Noury was one of the prison authorities in Karaj’s Gohardasht prison during the 1988 massacre of political prisoners.Despite all of the evidence, Noury denied the 1988 massacre as well as his presence in Gohardasht prison during the court proceedings. He attempted to justify the deaths of thousands of detainees by claiming that the MEK and communists were spreading “lies and propaganda.” He pretended to be a minor character who didn’t take part in the executions.

However, numerous witnesses testified in the Swedish court about how Noury and other regime officials sent dozens of prisoners to the gallows simply for refusing to withdraw their support for the PMOI/MEK. 30,000 prisoners were executed across Iran in a matter of months at the time. Witnesses also testified about Ebrahim Raisi, the regime’s president, who played a key role in prosecuting the prisoners in minutes-long trials without access to lawyers and sending them straight to the execution chamber.

“There have been numerous reports that these political detainees were not only assaulted, but also tortured.” Whippings to the feet and other forms of torture have been widely reported. Our witnesses and plaintiffs described mock executions and gas chambers as part of this.

May 3 – Stockholm
Freedom-loving Iranians and supporters of the Iranian opposition PMOI/MEK rallying outside the court session of Iranian regime operative Hamid Noury for justice on #1988Massacre.#Iran#ProsecuteRaisiNOWpic.twitter.com/djDI5RcBli

Women were raped and some were forced to witness the executions of others. There are graphic images of the traces of the lashings on the feet of those who were subjected to them. There were no international courts, no lawyers, and no way to object or request an appeal,” Lewis explained.The lawyer continued to detail Khomeini’s orders for the massacre of PMOI/MEK members who refused to compromise their political beliefs.

“Khomeini’s orders, known as a fatwa, were used to set the grounds for the massacre. “In this text, Khomeini referred to the PMOI/MEK as ‘enemies of God’ who must all be executed,” Lewis continued, before giving a brief account of the number of female PMOI/MEK members imprisoned throughout Iran. During the 1988 massacre, all female PMOI/MEK members were executed in Gohardasht prison in Karaj, west of Tehran.

Kenneth Lewis presented strong evidence proving that the killings and massacres of political prisoners, particularly the genocide against the PMOI/MEK, were planned months before the PMOI/August MEK’s 1988 “Operation Eternal Light,” and that Khomeini’s order had already been issued in the final segment of his closing arguments.