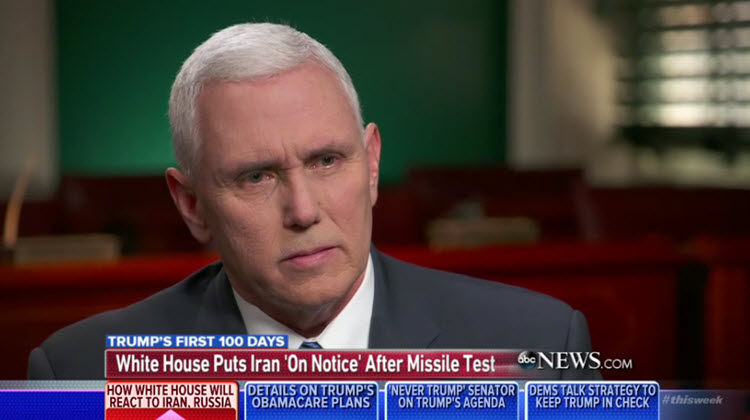 Vice President Mike Pence has warned the Iranian Regime to think twice about testing Donald Trump’s patience in an interview on ABC with George Stephanopoulos.

Pence said: “Iran would do well not to test the resolve of this new president. [They should] think twice about their continued hostile and belligerent actions.”

When asked, what would test Trump’s resolve, Pence mentioned the Iranian ballistic missile tests and military support for Houthi rebels in Yemen. He noted that with Trump “everything’s on the table”- including military action, which was ruled out by Defence Secretary James Matthis.

The U.S. Treasury Department announced new sanctions on Iran last Friday; one day after Trump tweeted that the Gulf nation was “on notice” for its ballistic missile test.

The sanctions extended to 13 more individuals and 12 more companies which funnel money to the Iranian Revolutionary Guard Corps, a key repression organisation within the country.

Iran responded by placing sanctions on American business that sponsored terrorism and repression but did not specify which companies they were or what terror acts had been linked to them.

Pence stated that the Iranian Regime’s provocation is insulting to the deal reached with world powers, including the USA and the UK, in 2015.

It read: “Iran is playing with fire. They don’t appreciate how ‘kind’ President Obama was to them. Not me!”

Trump was a heavy critic of the nuclear deal but his Cabinet picks, including  Mattis and Secretary of State Rex Tillerson, have stated that America must abide by the deal, but that perhaps a full review may be undertaken.