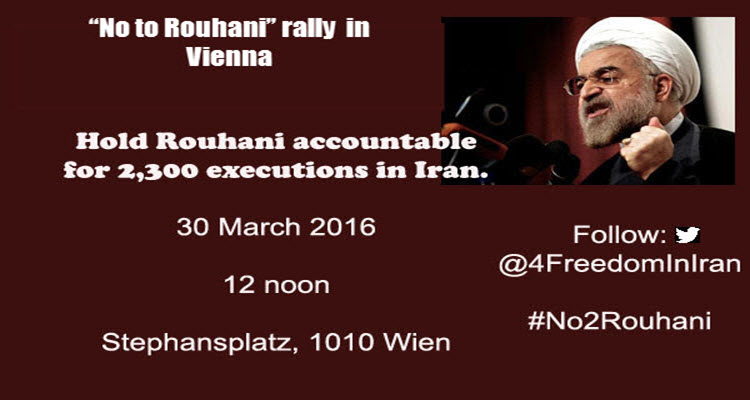 Supporters of the PMOI (People’s Mojahedin Organization of Iran) will protest in Vienna on Wednesday 30th March against the many human rights violations committed by the Iranian regime – namely the horrific mass executions, arbitrary sentences for so-called crimes and the export of Islamic terrorism. The organisers aim to bring attention to the human rights violations that are spiralling out of control, not just in Iran but throughout the region.

The Iranian regime’s President Hassan Rouhani had been scheduled to visit Austria on Wednesday and Thursday but cancelled his trip at the last hour.

The National Council of Resistance of Iran (NCRI) have said on their website that the rally, organised by the Human Rights Center for Victims of Fundamentalism, will be held at Stephansplatz Square in the centre of Vienna at noon. Exhibitions will be displayed in the streets to show some of the human rights violations that are taking place every day in Iran.

The Human Rights Center for Victims of Fundamentalism is an organisation that supports the People’s Mojahedin Organization of Iran (PMOI or MEK) – the primary Iranian opposition group and the pivotal force of the NCRI coalition.

One of the issues to be addressed at the rally will be the “all-out support” that Tehran is providing to Syrian dictator Bashar al-Assad and the massacre of Syrian people. Tehran’s continued proliferation of weapons of mass destruction, including ballistic missile tests, will also be highlighted. The demonstrators will draw attention to two of the “pillars of the clerical regime”. Firstly, the policy of exporting the “Islamic revolution” and, secondly, the proliferation of weapons of mass destruction. These are two things that the Rouhani administration has relentlessly continued to pursue as well.

The rally will also be an occasion for those in attendance to voice their support for the PMOI members that are currently detained in Camp Liberty in Iraq. Last year, on 29th October, a large section of the camp was destroyed and 24 residents were killed following a rocket attack.

According to the NCRI, the demonstrators will urge the United Nations and the US to provide much needed protection to Camp Liberty and the residents.