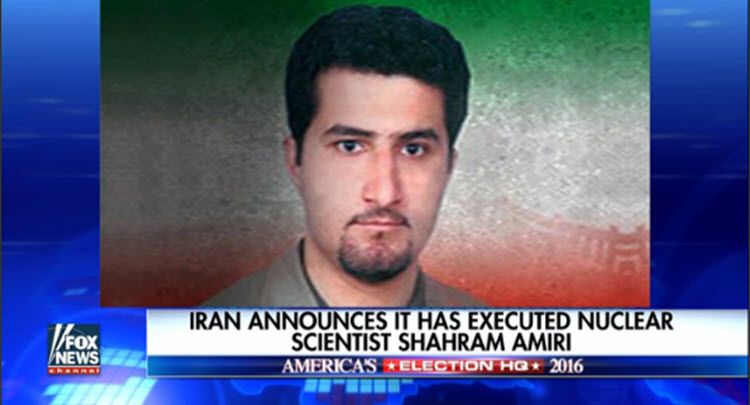 Fox News have reported that the “Iranian nuclear deal may already have cost a life”. Iran has announced that a prominent nuclear scientist has been executed. The regime said that he provided the “enemy” [the United States] with vital information on the nuclear program.

The victim has been named as 40 year old Shahram Amiri. US officials say he was paid 5 million USD for information on Iran’s nuclear program. The opposition claim that he returned to Iran, after living in the US, because the regime threatened his family.

When he returned to Iran he was hailed as a hero by the regime. They said he was a double-agent that they planted to get information about the US. The expert on Fox News said however that the fact they killed him soon after indicates that this may not be accurate information. He also slammed the claims by the regime that the US kidnapped Amiri.

The expert added that this execution shows just how serious the Iranian nuclear weapons program is and “just how high the stakes are”.

He said that it was a mistake letting Amiri return to Iran, sending him almost certainly to his death.

When asked what should have been done, the expert told Fox News that, if Amiri was a legitimate defector to the United States, they should have protected not just him, but also his family in Iran.

Regarding Amiri’s death, the National Council of Resistance of Iran (NCRI), the Iranian opposition said: “Amiri’s execution is a desperate attempt by the Supreme Leader Khamenei to intimidate and terrorise the regime’s nuclear experts and scientists and to prevent them from leaving the country after the nuclear deal. Engulfed in serious domestic and external crisis and facing growing popular discontent and opposition at home, the regime has had to deal with unprecedented defections within its own ranks.”

The full video report can be viewed here.