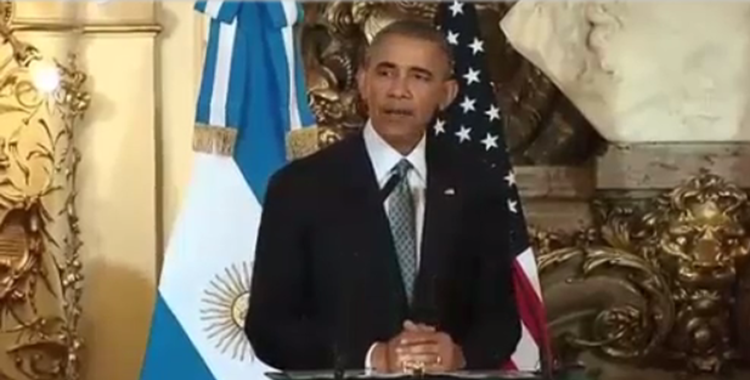 United States President Barack Obama said in Buenos Aires Wednesday that the United States has offered whatever help it can give to hold accountable those responsible for the deadly 1994 bombing of a Jewish community center in the city, CNSNews.com reported.

Argentinian investigators have blamed senior figures in the Iranian regime for the attack, the worst in the country’s history.

At a press conference with Argentinian President Mauricio Macri, Obama said he would shortly pay a visit to “the moving memorial to the horrific bombing of the AMIA Jewish community center almost 22 years ago.”

“I told President Macri that the United States offers whatever help we can to finally hold these attackers accountable,” he said, expressing the same sentiment with regard to those responsible for Tuesday’s terrorist attack in Brussels.

In expressing both nations’ solidarity with the people of Belgium, Obama said the people of the U.S. and Argentina “understand the pain they feel viscerally because our countries, as well, have known the scourge of terrorism, and we’ve seen our own citizens impacted by this kind of senseless, vicious violence.”

“The world has to be united against terrorism,” Obama said. “And we can – and we will – defeat those who threaten the safety and security not only of our own people but of people all around the world. So that’s a top priority of ours, and I know that President Macri shares those beliefs.”

The terrorist group Islamic State of Iraq and Syria (ISIS/ISIL) has claimed responsibility for the attack in Brussels, which cost 31 lives. The 1994 suicide truck bombing of the AMIA (Argentine-Israel Mutual Association) center in Argentina has been linked to Lebanese Hezbollah and its Iranian patron.

In 2007, Argentina asked Interpol to issue “red notices” – a rough equivalent of an international arrest warrant – for eight senior Iranian officials and a top Hezbollah terrorist suspected of involvement.

Interpol complied with the request in the cases of the Lebanese suspect and five of the Iranians. The Lebanese man, Hezbollah terror chief Imad Mughniyah, was killed in a bomb blast in Damascus in 2008.