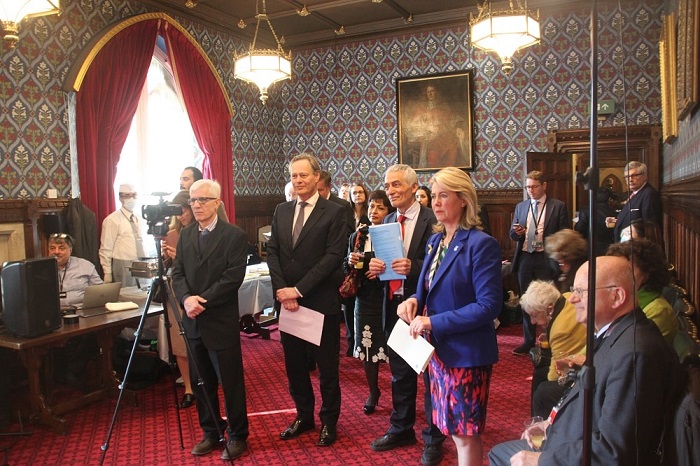 On the eve of Nowruz, dozens of members of both Houses of Parliament and members of the UK’s Anglo-Iranian community gathered at the Jubilee Room in Westminster for a Persian New Year reception. Despite the governmental repression, cross-party MPs and Peers expressed solidarity for the Iranian people, the National Council of Resistance of Iran (NCRI), and mass movements around the country.

They condemned the Iranian regime’s crackdown on protestors and NCRI sympathizers, saying that the regime’s response to mass calls for freedom and democracy should be seen as a symptom of its weakness, which is being challenged by a growing popular movement for change.

“The world is confronting a crisis scenario, and at the same time the regime is engulfed in survival crises without any solution,” NCRI President-elect Mrs. Maryam Rajavi said in a message to the British parliamentarians. Iran’s ruling dictatorship is presently at its weakest moment in 43 years of rule. Poverty, corruption, and repression have all contributed to broad social unrest. Iran has been jolted by eight major countrywide protests since 2018. During the November 2019 uprising, the regime brutally killed at least 1,500 people.”

On the eve of #Nowruz and the beginning of the Iranian New Year, I salute all of you and wish that the New Year and the advent of spring would bring spring of freedom and democracy for the people of #Iran. pic.twitter.com/ch5h0udN5L

“However, the popular uprisings and the activities of the organized Resistance and the Resistance Units have brought the prospect of the regime’s overthrow much closer than ever. Officials in the regime, including Khamenei, have warned against this possibility and the People’s Mojahedin’s role.” Mrs. Rajavi continued.

, co-president of the British Committee for Iran Freedom (BCFIF), underlined cross-party support for the NCRI’s need for a determined approach. “We call on the UK government to support the Iranian people and Madam Rajavi’s resistance movement. We implore our ministries and government to accept Madam Rajavi’s 10-point plan for a future Iran, which includes the Iranian people’s legitimate democratic aspirations as a viable alternative to the mullahs’ ruthless rule,” he stated.

The cross-party MPs who spoke at the occasion emphasized the significance of an international accountability mechanism to remove impunity in Iran, citing the regime’s intensified crackdown and rising number of executions since Ebrahim Raisi took office as president.

“The regime is more desperate and weaker than it has ever been in its history,” stated BCFIF President Rt Hon David Jones MP. And it sees Madam Rajavi’s 10-point democratic platform gaining international support and recognition as the viable democratic alternative to its ruling religious dictatorship, despite Tehran’s billion-dollar defamation and a propaganda campaign.” 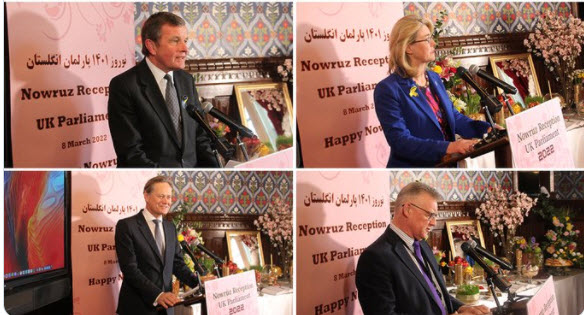 President of the International Committee of Parliamentarians for a Democratic Iran, added, “To end impunity for regime leaders, we must hold them accountable for their human rights violations and call them out on their crimes against humanity. In this regard, my colleagues and I have submitted EDM615, which has so far received 40 cross-party signatures and calls for the government to pursue a UN Commission of Inquiry into the 1988 massacre, as well as designating July 19 as the day to memorialize victims of themassacre.”

The mullahs will not be able to overcome the growing support for the pro-democracy opposition NCRI and popular dissent, according to BCFIF co-president Steve McCabe MP. Their dictatorship is weak and on the verge of collapsing.”

“The international world must reject the religious tyranny in Iran and unite with the people and their Resistance organization, the NCRI, who are making a huge personal sacrifice to promote the cause of freedom, human rights, and democracy,” stated Rt. Hon. Sir Roger Gale MP. Because there is no prosperity in Iran without justice, the UK must likewise help to ensure accountability.”

“We must also remember that the regime in Iran is supplementing its domestic persecution by spreading terrorism and destabilizing the region,” Rt. Hon. John Spellar MP remarked. The regime’s two-pronged strategy is based on the idea that it can only survive by causing more instability and killings.”