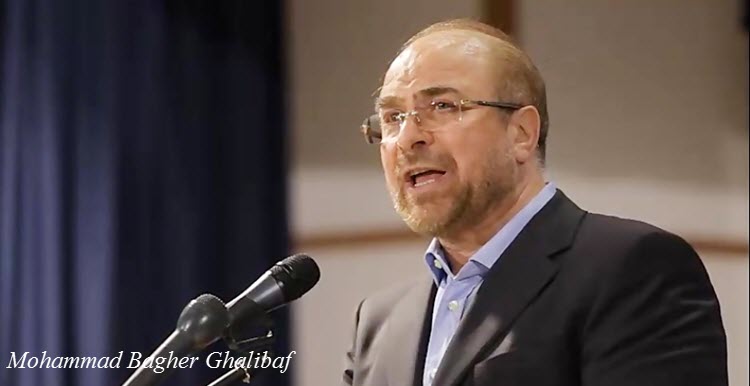 Disputes between factions vying for Iran’s presidency continue, especially regarding economics, as each faction accuses the other.

Mohammad Bagher Ghalibaf, Tehran’s Mayor, said as he registered his candidacy, “[Iranian President Hassan] Rouhani speaks of economic conditions improving. But he would be more informed about the economic situation if he took a step out of his office. It would become crystal clear for him that only 4% of the society is happy with the status quo. The truth is that people from all walks of life are very unhappy as small and large production units are forced to shut down one after another.” Ghalibaf slammed Hassan Rouhani, describing his performance as “pointless and promotional plans” over the past 4 years.

On Thursday, April 13th, according to the state-run Mehr News, Ghalibaf stated, “When someone promises 100-day plans without any basis and only to earn votes, it is clear that he does not understand executive management and therefore, he turns to dishonesty.” He added, “By looking through the records, we can see that the government has always talked of pointless promotional plans that have no clear outcomes.” Ghalibaf also admitted, “The tsunami of unemployment has collapsed the social and economic atmosphere of the country,”

Keyhan Daily, under the patronage of Iranian Supreme Leader Ali Khamenei, wrote, “Playing with the phrase ‘average income’ while some people are receiving wages of only 700,000 to 900,000 tomans a month ($200 to $260), and there are others who receive huge salaries, from 50 to 250 million tomans a month, along with numerous bonuses) (from $14,300 to $71,500). Furthermore, at least 12% of the population is unemployed and lacking even the slightest income.”

State-run ‘Vatan-e Emrooz’ reported, “In the ‘moderate’ government there have been records broken and its impacts will not be erased very easily! This government has no will to make any economic decisions!”

In response, newspapers loyal to Rouhani’s factions were seen writing their own pieces.

“Ahmadinejad’s government introduced subsidies and yet suddenly increased energy prices by 400% after being fixed for five years,” wrote the state-run Arman Daily.

The state-run Sharq Daily raised attention to the huge salaries of the Astan Quds Razavi foundation, chaired by presidential candidate Ebrahim Raisi, although it did not mention him by name. “Statistics show the wealth of this foundation is truly massive and gigantic. No one is informed about the truth,” adding, “Astan Quds Razavi has many endowments. Nearly half of the real estate in the city of Mashhad, most of the real estate in the cities of Chenaran, Sarkhas, Fariman and other towns in the three different Khorasan provinces. This also includes agricultural grounds, city areas, forests, stores, houses, vehicles, portions of factories, hospitals, aqueducts, water wells and in numerous different cities across the country, including: Isfahan, Tabriz, Kerman, Sirjan, Rafsanjan, Gorgan, Sari, Chalous, Varamin, Tehran, Karaj, Garmsar, Qazvin, Bam, Rasht, Lahijan, Langroud, Yazd, Ravar, Shushtar, Shiraz, Neireez and also property in the countries of Syria, Azerbaijan, Afghanistan, India and Tehran.”