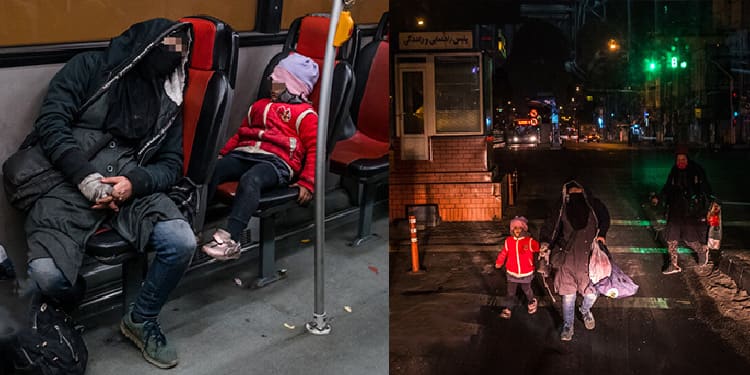 The housing crisis is just one of the many problems that the misogynistic mullahs have created in Iran. Destitute men, women, and children sleep on roofs and in buses and cars. These are some of the warning signs of the capital’s housing crisis. According to official statistics, the vast majority of Iranians live in poverty. As a result of rising inflation, many people are unable to afford to rent houses and apartments.

Chamran: people sleep in buses rather than their homes

Sleeping in buses is a new phenomenon and a shocking disaster that government institutions, including Tehran’s City Council, dismiss as a problem that must be addressed. Nasser Amani, a member of Tehran’s City Council, claimed it was a “goodwill gesture” by the city. On January 4, he told a public meeting that Tehran’s municipality had “assigned several buses to shelter those who come to Tehran for medical treatment or administrative work and sleep in the parks.”

The head of Tehran’s City Council, Mehdi Chamran, responded to the public’s reaction to this catastrophic phenomenon.

Amani accused the media of “lying” and “damaging” the regime

By reporting on homeless people sleeping in buses, Nasser Amani accused the media of “lying” and “damaging” the clerical regime. Previously, a photographer for the semi-official ISNA news agency provided a photo report on this issue. He had been spending time in these buses since early December, preparing his account. He noticed that many people slept on these buses all the time.

“Every night, these people try to catch one of the buses to stay out of the cold and sleep for a few minutes,” he wrote in his ISNA report. On these cold nights, women, men, and even children without shelter crowd these buses. Everyone has a unique story to tell. Their common story, however, is that they do not have any homes.

Everyone has a unique story to tell

The women who sleep in buses to avoid the bitter cold of winter have no place to live. They mostly slept under bridges, on park benches, in bus stations, and even in empty graves and underground holes. These impoverished women board a bus in order to get a few hours of sleep in a warm place, but they must change buses at each end station.

This is a disaster that poverty has caused for poor people

These women would rather sleep on a bus than in one of the city’s few warm shelters, where they are mistreated and insulted. Women’s poverty is a result of the clerical regime’s heinous rule. The situation has deteriorated to the point where women are sleeping in buses during the winter.

However, this is not the only disaster that poverty has caused for women. On January 2, 2022, the state-run Fararu website published a story about a teenage girl in Khuzestan. The 17-year-old girl had to sell her body for two hours of cool air conditioning.