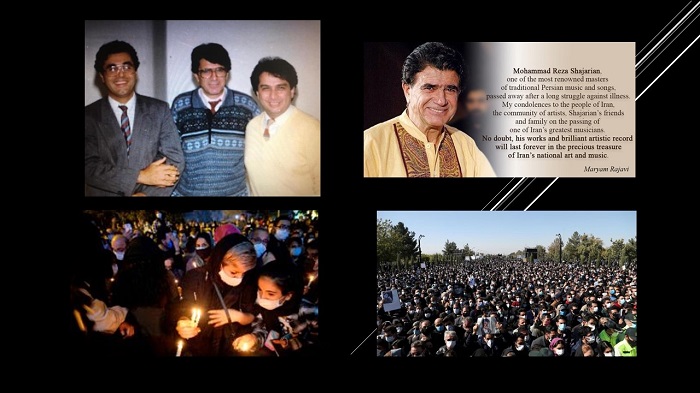 Protests have erupted as the people of Iran mourn the death of beloved Iranian singer, Mohammad-Reza Shajarian, who passed away on the 8 October 2020. Shajarian had spoken out against the oppression of the regime and was banned from performing and was not allowed to be broadcast on the state-run Iranian tv, under the direct orders of supreme leader Ali Khamenei. The people took to the streets of Tehran to express their outrage of the regime’s censorship.

My condolences to the people of #Iran, the community of artists, and #Shajarian’s friends and family on the passing of one of Iran’s greatest musicians. No doubt, his works and brilliant artistic record will last forever in the precious treasure of Iran’s national art and music. pic.twitter.com/efEVVWG9Wp

Regarding Mr Shajarian death, Mrs Maryam Rajavi, the president-elect of the National Council of Resistance of Iran (NCRI), said: “My condolences to the Iranian people, to Iran’s arts community, and to Mr Shajarian’s family and friends on the passing of one of Iran’s greatest artists. Shajarian’s brilliant work and record are everlasting and among the most precious treasures of our national art.

#BREAKING
Oct 8—Tehran, #MEK #Iran
Following the death of Mohammad-Reza Shajarian, an iconic vocalist master of traditional Persian music, Iranians are out in the streets in his memory.
Interestingly they're chanting:
"State media is a disgrace!"https://t.co/waRk3Xmo8n

The ruling mullahs’ restrictions and pressures have not and will never undermine his status and his enormous contributions to Iran’s art and music scene, particularly the art of singing. Without a doubt, Iran’s arts community and those who care about Iran’s music will build upon his contributions, teachings, and unique innovations as never before and will add to Iran’s unrivalled treasures of arts and culture. Mr Shajarian’s vocals have been warmly received in the hearts of millions of Iranians for several generations and cannot be extinguished.”

#MEK #Shajarian was among artists who revolutionized #Iran’s music and singing with new methods in the 1970s. Shajarian was outraged by the #Iranian regime’s atrocities against protesters in the 2009 nationwide uprisings and protested the regime’s suppression of demonstrators. pic.twitter.com/FkZldkuIcV

Shajarian was prohibited from holding concerts since 2009 when he defended protestors of the mullahs’ sham Presidential election. His music was also banned from airing on the state-run tv, including his famous Ramadan prayer, “Rabanna”.

In a ceremony in honour of the legendary Iranian poet, Hafez, in April 2015, Shajarian answered to the audience who were encouraging him to sing by responding: “I live in a country, where for the past several years I have been prohibited from singing for my own people.”

He had openly addressed the repressive nature of the regime in many interviews of the years. Shajarian described how they intended to force him into seclusion by censoring his art, however, he was not prepared to give in to the clerical regime.

In honour of the memory of Shajarian, considered a master of Persian traditional music, the people protested in anger with slogans and chants against the regime. These included “death to the dictator”, “the state television and radio is a disgrace”, and “our IRIB is our disgrace,” in reference to the Islamic Republic Broadcasting Organization (IRIB).

Security forces attacked the mourners and disperse the crowds which formed to celebrate the life of Shajarian and protest the censorship of his art and music. The regime also attempted to oppress the voices of the Iranian people by limiting their internet bandwidth as the protests took place, however, some were able to post short videos to social media.

Despite the best efforts of the regime to subdue and control the artistic expression of Shajarian, this public display demonstrates his importance to the Iranian people. The regime has been unsuccessful in their attempts to wipe his contributions to the music and culture of Iran, which will live on in the Iranian community.