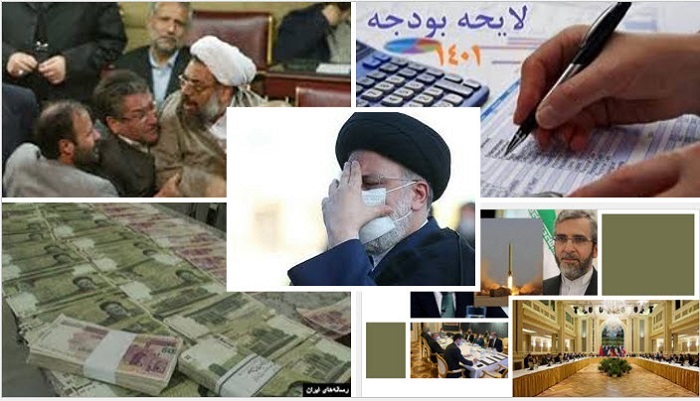 Iran’s regime president, Ebrahim Raisi, stated on April 8 that revoking the country’s subsidized currency exchange rate will not cause an economic setback. Rising inflation and skyrocketing prices have left tens of millions of people unable to purchase basic necessities, including bread, less than a month later.

The rise in rent and mortgage rates is “breaking the tenants’ backs,” according to state media reports on housing prices. Bread has become so expensive and scarce that state media are warning that “a rise in bread prices triggered the French revolution.”

Raisi has responded by claiming that the recent unbridled price rise will be contained by an increase of three to four million rials in subsidies for the country’s poorest families and that there is no need to be concerned.

However, Iran’s previous fiscal year (March 2020 to March 2021) required around $8 billion in subsidized currency to purchase basic goods. As a result, the Raisi cabinet literally pocketed $8 billion by eliminating the subsidized currency, which can be used to advance the regime’s nuclear weapons program, missile and drone development, fuel regional terrorism, and beef up their domestic crackdown apparatus.

According to the state-run Eghtesad-e Ayande daily, the Raisi cabinet has cheated the Iranian people out of at least $18 billion in basic goods. On May 14, Hojatollah Abdolmaleki, the regime’s Labor Minister, boldly stated that the recent wave of price hikes will provide the Raisi government with around $1.27 billion per month.

This theft in plain sight has reached the point where Hossein Raqfar, a regime economist, describes it as “another example of theft and plundering in Iran’s economy” aimed at “compensating the [regime’s] budget deficit” on May 15.”Anything else is simply made-up stories!” Gholam Ali Jafarzadeh Emenabadi, a former member of the regime’s Majlis (parliament), was said to add to the scope of the disaster.

Second, Raisi has pledged to increase state subsidies for deprived Iranian families to four million rials, citing the recent outburst of anti-regime protests in various cities across the country. However, in the face of skyrocketing prices, this will achieve nothing.”You pay me four million rials per month but charge me 50 million rials in expenses!” On May 15, a taxi driver told a reporter from the state-run Tasnim news agency:

As a result, the regime is pocketing far more than it is providing people in “increased” subsidies by eliminating the state-subsidized currency used to provide basic necessities. The rial, Iran’s currency, is plummeting. As a result, the actual monetary value of the four million rials in promised subsidies is currently decreasing.

Inflation is rapidly increasing. Therefore, rising prices are making the four million rials in subsidies look all the more meaningless.

Raisi also refuses to explain how his cabinet will provide the promised four million rials in subsidies to the country’s poor population if his cabinet cannot provide the necessary subsidized exchanged currency. This is not included in the fiscal budget plan for this year, and the funding source for such an initiative is still unknown.

To cut a long story short, the only way to get more money is to print more money. Former regime Central Bank chief Abdolnnaser Hemmati acknowledged that Raisi’s cabinet has printed 1.42 quadrillion rials ($4.67 billion) in banknotes to date.