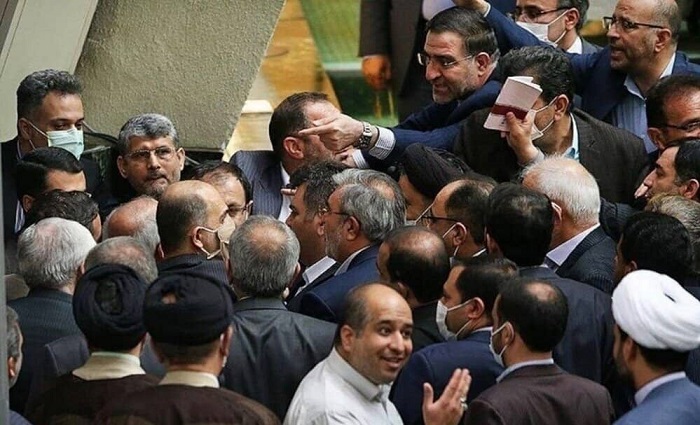 Ebrahim Raisi, the president of Iran, presided over a closed-door session of the regime’s parliament on Sunday, December 4. Even though very little information from this meeting has leaked, it serves as a tip-off to the growing infighting.

During the meeting, Raisi “criticized the parliament” and warned MPs “for taking wrong decisions in some of the parliamentary committees,” according to the official IRNA News Agency. He also asked MPs to “fairly judge and speak about the ministers’ and local officials’ performances” and to “leave the final decision in selecting local and national authorities to the government.”

“Some parliamentarians were arguing with ministers, wreaking havoc in the Majlis and preventing ministers from speaking. As a result, the parliament’s speaker was forced to ask MPs to calm down and allow ministers to speak,” IRNA added.

Raisi, a ruthless mass murderer best known for his role in the 1988 massacre of 30,000 political prisoners, was chosen as Khamenei’s successor in a sham election widely boycotted by the people.

His presidency was the most crucial piece of Khamenei’s puzzle of consolidating the ruling theocracy in the face of an impending uprising. Earlier in 2020, Khamenei handpicked the parliament, paving the way for Mohseni Ejei, another mass murderer, to succeed Raisi as chief of the judiciary in 2022.

Since its inception, the tightly vetted parliament has been a hotbed of infighting. However, the nationwide uprising has exacerbated these squabbles, rendering the situation within Khamenei’s faction uncontrollable, forcing him to constantly warn his ilk.

Since the beginning of the protests, Khamenei’s MPs have repeatedly labelled Raisi’s administration “incapable,” slandering his “closed ministries” for failing to address “the country’s problems.”

Despite Khamenei’s repeated warnings to the Majlis to strengthen Raisi’s government and avoid impeaching ministers, parliamentarians impeached or forced the resignation of three labour, education, and urban and road development ministers.

“Amend your cabinet before we impeach the majority of your ministers,” MP Jalil Rahimi Jahan Abadi warned Raisi on December 3, according to the state-run Etemad online website.

Raisi’s government has caved in response to these pressures. “At least ten officials will change in local and national posts as a result of the president’s decision,” Ali Bahadori Jahromi, the government’s spokesperson, said on December 4, according to state TV.

Raisi’s failure to lead the executive branch is only one aspect of Khamenei’s abject failure to consolidate power in his regime. By having a unified governing body, Khamenei chose to suppress any uprising. He appointed three notorious henchmen, Raisi, Eje’i, and Parliament’s Speaker Mohammad Bagher Ghalibaf, to carry out his orders at any cost.

History appears to repeat itself. The Shah, Iran’s last monarchical dictator, had also banned all political parties, resulting in a one-party state. A few months before Iran’s anti-monarchical revolution in 1979, his parliament featured scenes of handpicked MPs criticizing General Azhari’s military regime. Under duress, Azhari was forced to resign.

Khamenei has learned his lesson, emphasizing repeatedly in recent years that taking a step back causes his regime to collapse. The Iranian people and their organized Resistance movement are well aware of this, and they are increasing their efforts to destabilize the regime at any cost.