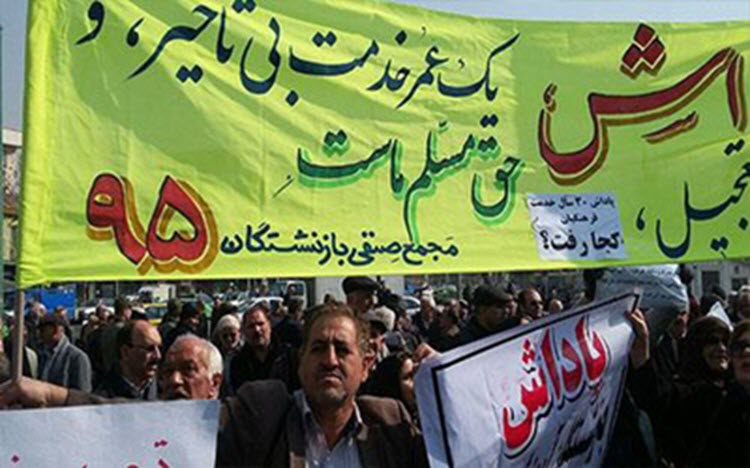 500 retired teachers rallied in front of the Iranian parliament at 10 AM on Monday, February 27th; demanding equality in salary payments in comparison to other ministries.

The workers of Ardabil Steel Company lodged a protest against the 14-month overdue salaries.

On February 26th the state-run Tasnim News reported about the terrible condition of workers. The news reads:”the workers of Ardabil Steel Company rallied this time in front of the Organization of Cooperatives, Labor, and Social Welfare in Ardabil Province; demanding the 14-month overdue salaries.”

One of the workers participating in the rally referred to the problems of workers and stated:”the workers of this factory have not received a penny for 14 months. On the eve of the arrival of the new year, the workers have encountered livelihood problems.”

The hard workers of this factory (Ardabil Steel Company) have staged a protest in front of the Governor-General Office of Ardabil for several times but so far no measure has been adopted by the responsible authorities.

The workers of the South Pars Phase 13, Payandan, and Niroo-Pajooh Companies also protested on Sunday, February 26th; demanding the receivables and 2-month overdue salaries to be paid. The directors of the company threatened to fire the workers and so far three of them have settled their account.

The workers of Ahvaz Water and Wastewater rallied on Sunday, February 26th; protesting against the 6-month overdue salaries as well as their receivables. On the same day, a group of sugar cane cutters of Haft Tepe Agro-industry complex (in Khuzestan Province, southwest of Iran) also protested against overdue insurance receivables.

One of the protesters said:”we have gathered today to protest against unpaid insurance receivables related to the time of unemployment for the sugar cane cutters worked from 1989 to 2013.”

The families of those sentenced to death gathered in front of the parliament of Iran on Saturday, February 25th. It is worth noting that the children were also present in the rally and the protesters participated in the gathering from different provinces. They also objected to the daily executions carried out by the regime; calling for the abolition of the death penalty.

As ILNA News reported, the people of Izeh (in Khuzestan Province) rallied on Friday, February 24th; protesting against the dirty drinking water of Karun Dam. The protesters were holding placards on which was written:”give us a pure drinking water, end the water rationing! , we rank first in unemployment and we are thirsty and unemployed people, just a few kilometers far from dams.”

The workers of Ahvaz Municipality for the second day protested on Friday, February 24th. Meantime, the sessional teachers of the Ministry of Education rallied in Hamedan on Wednesday and Thursday, February 22nd and 23rd; protesting against overdue salaries.

Those who were looted by the state-run Caspian Financial Institution rallied in front of the Central Bank of Iran on Saturday, February 25th; chanting slogans about the plunders of the regime.

The Caspian Financial Institution that was licensed by the Central Bank of Iran has taken people’s money for 4 months and it refuses to pay deposits and interests to the people. Those who were plundered by the state-run Padideh Shandiz Financial Institution also protested in Shandiz, Mashhad for retaining their rights.