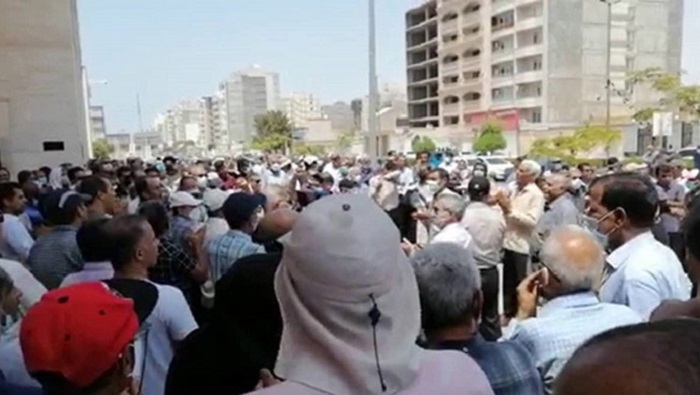 Protests, demonstrations, and rallies have become a daily occurrence in cities across the country, with people taking to the streets on a regular basis. While continuing to plunder the Iranian people, regime officials are looking for a new method of de-escalation.

The situation in Iran has changed dramatically since Monday, June 13th. Retirees and pensioners across Iran continued their protests for the seventh day in a row, rallying in 22 cities and chanting against the regime’s disastrous plundering policies.

To add to the regime’s worries, storeowners in a number of cities began rallying and gathering on Monday, protesting the rial’s recent depreciation against the dollar.

The threat of escalating protests has alarmed regime officials to the point where a new bill has been introduced in the mullahs’ Majlis (parliament) authorizing the regime’s oppressive security forces to use weapons against protesters on their own terms. As anti-regime protests spread across the country, this is intended to create a climate of utter fear and intimidation in Iran’s society and raise the spirits of the regime’s forces.

In such circumstances, one would expect regime officials to de-escalate social tensions caused by rising inflation and skyrocketing basic goods prices. According to Majlis member Jalal Mahmoudzadeh’s remarks on June 11, we are witnessing “hurried decisions by the government” to exacerbate the “crisis of rising prices.”

#Iran: Why the regime’s “ambiguity tactic” will backfire

With protests escalating across the country, regime officials are seeking a new method of de-escalation while continuing to plunder the Iranian people.#IranProtests https://t.co/ZP7yH5wrtv

But why is that?

The plundering nature of the mullahs’ regime ruling Iran is at the heart of the current situation. If theft falls even slightly in kleptocracies, the governing system will collapse because its entities derive their dynamism from a continuous cycle of plundering. This is precisely why Iran’s Supreme Leader Ali Khamenei is being forced to escalate the high-price crisis in order to prevent his rank and file from deserting in such perilous times when Iran’s society is on the verge of exploding.

Officials in the regime have adopted a policy of creating ambiguity in response to the current situation. For example, regime officials have been discussing plans to end the policy of providing subsidized currency exchange rates for over a year.

This issue was not mentioned in the most recent fiscal budget plan. However, rumors began to circulate about subsidized currency exchange rates for bread and medicine, as well as whether or not this policy had been cancelled. In practice, however, the price of flour skyrocketed by 1,300%; the price of various types of bread skyrocketed, and there is talk of bread rationing.

At the same time, regime officials are seen denying all of this, claiming that the price of one type of bread has not increased. No government official has been seen specifically calling for an end to the policy of subsidized currency exchange rates in the last year. Why? Keeping the general public in the dark for as long as possible in order to keep popular protests at bay.

The same method is used to determine the price of gasoline across the country. State media are reporting skyrocketing gasoline prices, only for regime officials to deny the reports and dismiss them as rumours.

Serving the same purpose as before: to keep the restive Iranian nation in a state of constant uncertainty. Officials are attempting to both prepare the public psyche for massive price increases while also reducing the impact of likely protests.

However, this method was put to the test in November 2019, when the price of gasoline tripled overnight. Officials from the regime denied the matter until it was finally revealed, sparking massive nationwide protests that turned into an unprecedented uprising that shook the regime to its core like it had never been shaken before.

With numerous rallies, protests, and demonstrations taking place as we speak, Iranian society is demonstrating that it will no longer accept Khamenei’s and his regime’s pretexts. As a result, the mullahs’ “ambiguity tactic” will not reduce the threat of escalating protests, but will instead pave the way for a new round of nationwide protests and uprisings.