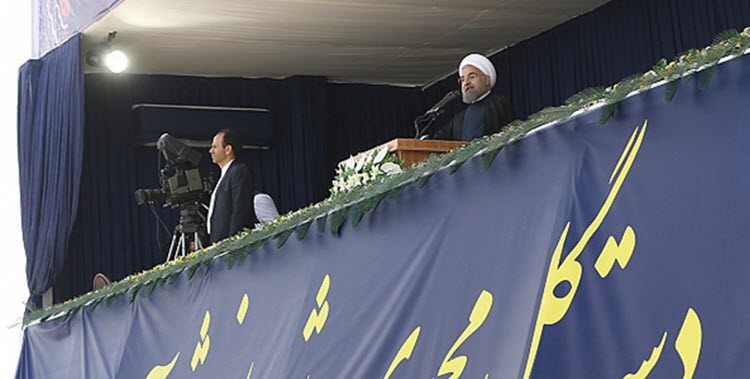 Rouhani spoke at a rally in Soleimani’s hometown Kerman, south-eastern Iran. The rally was held to mark IRGC Day. He said that Brigadier General Qassem Soleimani is among the “honours” of Iran and the Kerman Province.

Commenting that this friendship with Soleimani goes back to the Iran-Iraq war during the 1980s, he said: “Today if we look at eastern Iran, throughout Iran and throughout Afghanistan, Iraq, Syria, Lebanon, and Palestine we witness the hallmarks of General Soleimani’s courage and fearlessness.”

Fars news agency which is affiliated to the IRGC, reported that during his speech praising the regime’s terrorist Quds Force, Rouhani said: “In addition to upholding the security in the east of the country over the years, [the Quds Force] has been present wherever its sacrifices and courage have been needed.”

In a reiteration of the IRGC’s role in preserving the mullahs’ regime and in their meddling in other countries in the region, Rouhani added that the IRGC has been a “pioneer for solving the crises of the country”. He said that as well as being responsible for Iran’s security, they also work to secure countries that need the help of Iran. “… it is courageously present in all those scenes.”

Rouhani added: “The IRGC is a pioneer for sacrificing and in defending the holy shrines in Iraq and Syria and the oppressed people in Palestine, Lebanon and other countries seeking support from Iran. We hope that the IRGC and the victorious Bassij will succeed in all the scenes of defense and struggle.”

The NCRI state that the “Quds Force is the extra-territorial wing of the IRGC and the Iranian regime’s main arm for exporting terrorism and Islamic extremism.” As well as being involved in widespread meddling in the affairs of other countries in the region, namely Syria and Iraq, they also play a key role in various terrorist operations of the regime. For example, they played a part in the 1996 Khobar Towers bombing in Saudi Arabia and were involved with the 1994 bombing of the Jewish community centre in Argentina.