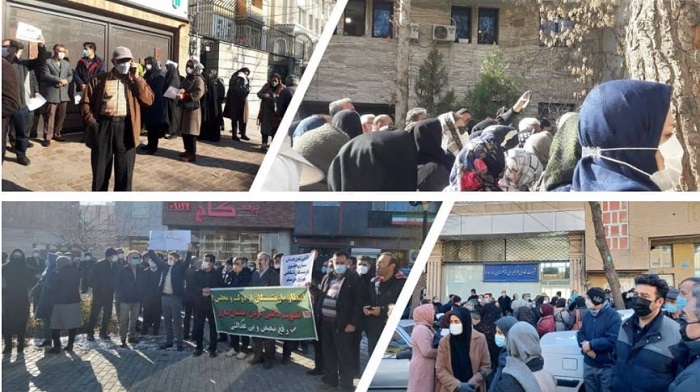 Protests by individuals from all walks of life have spread across Iran in recent days, according to reports collated by Iran’s opposition, the People’s Mojahedin of Iran (PMOI/MEK). These protests are taking place in response to Iran’s economic woes, which have grown intolerable as a result of the regime’s corruption, ineptness, mismanagement, and wasting of national money for its nefarious objectives.

On March 2, private-sector healthcare workers in Tabriz, northwest Iran, staged a protest in front of the parliament, demanding their six-month-late salaries. On the same day, butchers in Boroujerd, Lorestan Province, western Iran, held a rally to protest the forensic office’s decision to delay meat supplies and keep them in slaughterhouses for an additional 24 hours.

On Wednesday, defrauded creditors of the Badran Gostaran banking firm in Tehran held a new protest march. Creditors of the defrauded Money King Currency Institution protested in Tehran on the same day, demanding their money. These institutions have been allowed to run Ponzi schemes with impunity for years because they are owned by regime officials, religious endowments, and the Revolutionary Guards.

On Wednesday, contract employees from the Lorestan Province Electricity Department conducted a protest rally in front of the governorate, demanding full contracts, job security, and reasonable compensation. On Wednesday, workers at the Pars Hafta Tappeh paper factory went on strike for the sixth day in succession. They gathered on the company premises to show their displeasure with the authorities’ refusal to comply with their demands.

March 2 – Tabriz, northwest #Iran
Staff members of medical centers rally outside the local governor's office demanding their paychecks that have been delayed for the past six months.#IranProtests #اعتراضات_سراسری pic.twitter.com/la3yYLSLYY

On Tuesday, relatives of the victims of the PS752 flight rallied in front of Ukraine’s embassy, expressing solidarity for the Ukrainian people and condemning the occupying war. These activists, who lost loved ones when the Iranian dictatorship shot down a Ukrainian passenger airliner in 2020, stressed that they support the Ukrainian people, unlike Iranian regime officials. The demonstrators were ambushed and brutalized by thugs from the Iranian dictatorship.

On Sunday, the Amitis Company’s defrauded creditors held a rally to demand their stolen life savings. The Amitis Company defrauded people out of their life savings for four years by promising a one percent profit per day. This state-affiliated firm has raised more than 25 quadrillion rials, or $950 million, based on the current free-market currency rate. On the same day, looting creditors of the Negin Khodrow and Airthobia automobile factories held a protest rally in front of Tehran’s so-called revolutionary court, calling officials to hold the companies’ executives accountable for stealing people’s money and failing to supply them with vehicles. On Sunday, residents of Baneh, Kurdistan region, staged a protest rally in response to the regime’s barbarous killing of a Kurdish individual.

Social security retirees planned a nationwide rally throughout the country for the second weekend in a row on Sunday, in a significant move. Retirees and Social Security recipients have been voicing their dissatisfaction with their income and pensions, which have failed to keep up with growing prices and inflation. Their living conditions were also a source of dissatisfaction.

At the same time that pensioners across the country protested, contract teachers in Tehran held a large rally in front of the regime’s parliament (Majlis). Teachers have been holding protests to seek job security and equal pay for equal work.

Since the mass upheaval in 2019, which shook the regime’s foundations, the ongoing protests in Iran are the most extensive expression of rage and society’s combustible state. The rage is directed not only at the regime’s president, Ebrahim Raisi, who has pledged to resurrect the economy but also at the mullahs’ supreme commander, Ali Khamenei.

Indeed, Raisi, dubbed the “hanging judge,” was appointed president of the regime in order to suppress any critics, as seen by the rising number of executions and attacks on nonviolent protestors. These activities, however, have the opposite effect on society and increase its volatility, as the state media has admitted.

“In many situations, demonstrators have been met with violence rather than officials responding to their demands. According to analysts, this has not only failed to quell protests but has exacerbated social criticism,” the state-run Hamdeli daily said on Marc

March 2 – Tehran, #Iran
Investors of the King Money institution rallying and demanding for their stolen money to be returned.#IranProtests #اعتراضات_سراسری pic.twitter.com/qzjZOnDo7D