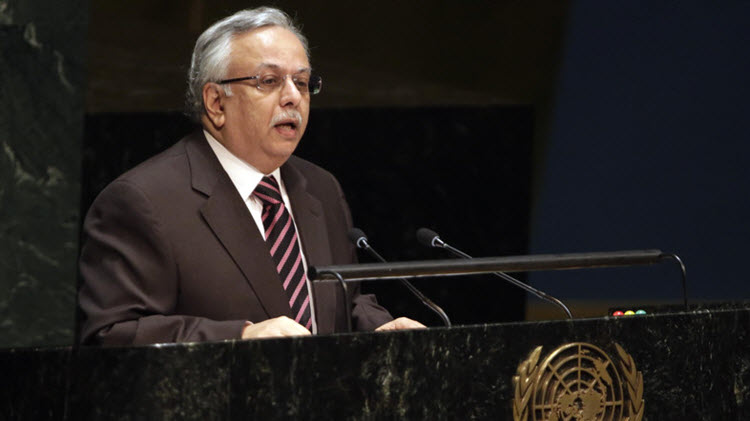 Saudi Arabia’s UN Ambassador Abdullah Al-Mouallimi and Yemeni Deputy Premier and Foreign Minister Abdulmalek Al-Makhlafi, said that Iran has no role to play in the region because it was the cause of the Yemeni crisis and not part of the solution.  Their remarks came at a symposium titled “Partners for a Sustainable Peace in Yemen” on Monday at UN headquarters in New York.

Attendees at the symposium included Adviser to the Royal Court and general supervisor of the King Salman Center for Relief and Humanitarian Aid (KSRelief), Abdullah Al-Rabeeah; Saudi Ambassador in Yemen Mohammed bin Saeed Al-Jaber; the Yemeni permanent representative to the UN, Khalid Yamani; Yemeni Minister of Local Administration Abdulraqeeb Fath; Yemeni ambassador to the US, Ahmed bin Mubarak; the special envoy of the UN secretary-general to Yemen Ismail Ould Cheikh Ahmed and the former US ambassador to Yemen, Gerald Firestein.

Humanitarian assistance, provided by Saudi Arabia to Yemen, estimated at more than $8.2 billion, was stressed by the organizers.

Al-Jaber said Saudi Arabia remained the largest supporter to the Yemeni economy in the past 30 years, and in his address, he emphasized the importance of bringing about a political solution in Yemen. He said further, that the current problem in Yemen was originated by a coup by a small-armed Yemeni component financially and militarily supported by Iran, who threatens the security and stability of the whole region.

Al-Jaber also said that the political solution in Yemen is based on three references:

– The Gulf Cooperation Council (GCC) initiative, in regards to the crisis in Yemen

– the outcome of the (Yemeni) national dialogue,

– UN Security Council Resolution No. 2216, which strengthened the international cover for military operations against the Houthis and the forces loyal to former President Ali Abdullah Saleh

Al-Rabeeah opened an exhibition titled “Toward a humanity without limits” at the UN premises, earlier that day. The exhibition displayed publications, reports and films reflecting the achievements of KSRelief since it began providing aid to affected countries, notably Yemen.

KSRelief is the King Salman Humanitarian Aid and Relief Centre, which is dedicated to providing humanitarian aid and relief. It aims to become a leading center for relief and humanitarian activities, and to transfer its values to the world. It seeks to develop strong partnerships with leading humanitarian organizations, and an effective process to respond to humanitarian crises quickly and effectively.