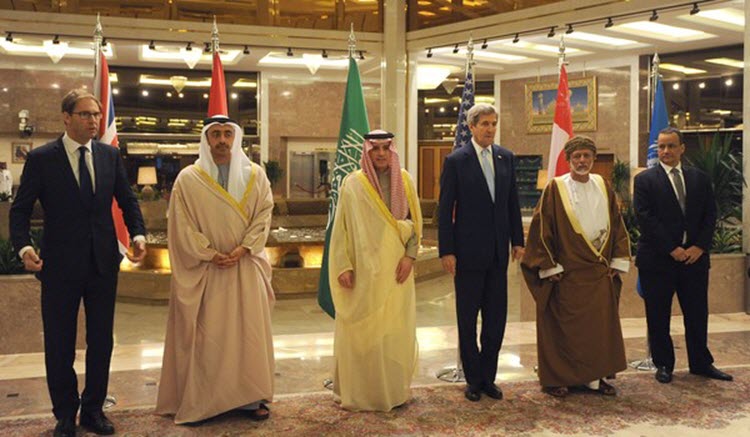 Adel al-Jubeir, the Foreign Minister for Saudi Arabia, spoke with US Secretary of State John Kerry at a press conference. He said that decisions regarding Yemen must be made based on the recommendations of the United Nations and the Gulf initiative.

The Foreign Minister also called on the international community to take a tougher stance with regards to the Iranian regime and its interference in the internal affairs of other nations in the region.

At the press conference Kerry said that he strongly condemns the terrorist attacks that took place on Sunday in the city of Aden in Yemen. He also said that the war in Yemen must come to an end in a manner that will keep Saudi Arabia secure. He urged all parties in Yemen to restart negotiations.

Before the conference, Kerry met with King Salman and Crown Prince Mohammed bin Nayef as well as other members of royalty in the Saudi capital of Riyadh.

On Sunday, Kerry said: “In turbulent times, it’s good to have solid friends. That’s why the United States’ partnership with Saudi Arabia is rightly so valuable.”

Along with diplomats from the United Arab Emirates, the UK and Oman, Kerry met the United Nations special envoy to Yemen – Ismail Ould Cheikh Ahmed.

The United Arab Emirates is one part of the Arab coalition that is fighting Houthis.

British Middle East Minister Tobias Ellwood said on Twitter that during the meeting a political process to end the war in Yemen was discussed. He said that the only way to bring peace to the country was through a political process.

Although Kerry and Jubeir did not give specific details about how the parties involved are going to agree to terms that have already been set out by the United Nations, Kerry did say that he hoped it would be done within two weeks.

The UN had said that a possible solution was to side-line President Abed-Rabbo Mansour Hadi who is backed by Saudi Arabia. It also suggested giving rebels a share of the power. Saudi Arabia, however, is very against this.

Kerry said: “You can see from the humanitarian situation, which is dire and deteriorating rapidly, that it is urgent that we try to bring this war to a close. But we also need to bring it to a close in a way that protects the security of Saudi Arabia.”