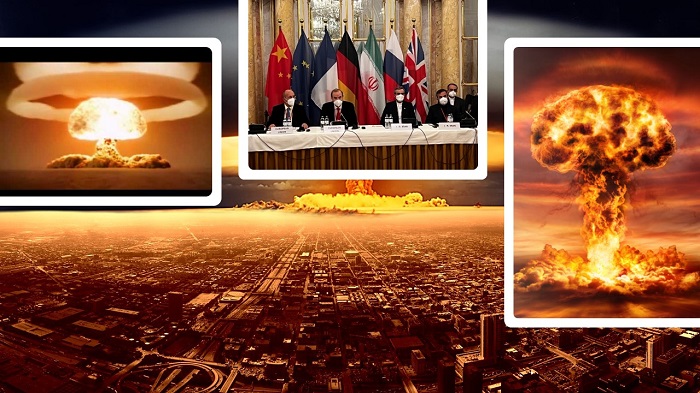 Last week, in Vienna, the long-awaited seventh round of talks aimed at salvaging the 2015 Iran nuclear deal finished. Little progress was made, and the process actually went backward after Ali Bagheri Kani, the Iranian regime’s chief negotiator at the talks, declared that Tehran was free to re-examine all of the terms that had been informally agreed upon before the discussions stagnated in June.

The selection of Ebrahim Raisi triggered the postponement

The selection of Ebrahim Raisi as the regime’s new president triggered the postponement, which was generally expected to result in even more severe policies and practices by the clerical rule. Only after the Raisi administration spent months avoiding the matter and promising vaguely that the discussions would start soon did Tehran return to the Vienna talks. During that period, the patience of Western negotiating partners wore thin, and after meeting in Washington, representatives from the United Kingdom, France, and Germany expressed agreement on the necessity to take a different approach if the Iranian regime continued to wait.

On the one hand, this explains why Tehran eventually agreed to detailed arrangements for the seventh round. On the other hand, it raises fundamental doubts regarding the significance of the ostensible strategy shift. Tehran is merely advancing the process far enough to postpone its inevitable conclusion, which is almost certainly the collapse of the Joint Comprehensive Plan of Action.

The mullahs’ regime is trying to complete its nuclear weapons

If the seventh round of Vienna talks achieved anything, it was to add more credibility to this description of the regime’s behaviour. Following the conclusion of the week’s talks, US Secretary of State Antony Blinken stated that “Iran right now, does not appear to be serious about doing what is necessary to return to compliance,” while representatives from the UK, France, and Germany told the press that Iran’s positions “were incompatible with the deal’s terms or went beyond them.”

Vienna talks failing shows again that #Iran’s regime, using appeasement, plunged talks into cycle of deceit to buy time & make the bomb. Khamenei’s fate is tied to his nuclear program, another reason why Raisi was selected president. This cycle must be ended with a firm approach

Bagheri Kani: the regime “will not back down from its demands,”

Bagheri Kani further stated that the regime “will not back down from its demands,” and that it is willing to keep the JCPOA on life support while reiterating those demands incessantly. Tehran had consistently stated that it anticipated the European Union to exert pressure on the US, resulting in the lifting of all economic sanctions, even before the Raisi administration took office. Since the regime’s presidential change, it has been evident that this demand is not restricted to nuclear-related restrictions, but also includes those targeting terrorist actions and human rights violations.

It is now unclear what the Western signatories to the JCPOA aim to achieve by prolonging the process and convening the eighth round of Vienna talks, as is expected. All that is known is that they will not abandon the already-dead accord, much less pursue a course of action that disregards the long-stalled negotiations as a failure. However, this contradicts statements made by those same powers ahead of the seventh round, in which they stated that Iran would face penalties if it continued to wait.

US State Department: all alternatives are on the table

Although the scope of those penalties was never articulated, the US State Department stated repeatedly that all alternatives were on the table. However, the only choice is to reimpose sanctions and put further pressure on Iran’s criminal regime. Sanctions have already devastated the regime’s economy, forcing the authorities to expand government spending in an attempt to quell mounting domestic unrest.

These circumstances, taken together, make Tehran unusually susceptible, and that vulnerability might be effectively exploited by coordinated Western intervention.