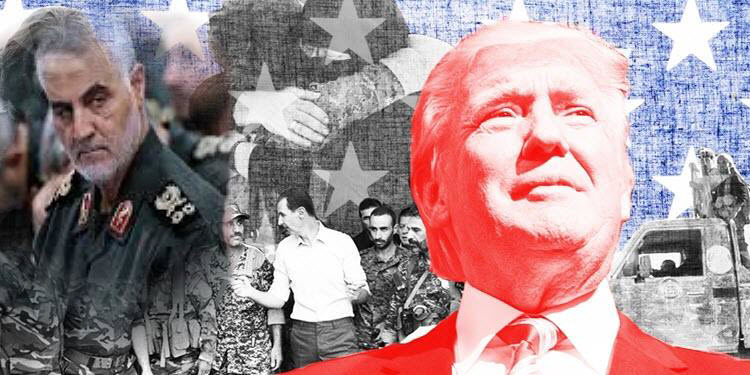 Escalating tensions between the United States and Iran are World news.  On Friday, The Treasury Department placed additional sanctions on Iran for testing ballistic missiles in defiance of a United Nations resolution. On Saturday, Iran reacted by launching additional long-range missiles.

While US President Trump placed Iran “on notice”, Iranian Foreign Minister, Javad Zarif, stated that Iran “will never use our weapons … except in self-defense.”

Naval warships have been deployed off the Yemeni coast in response to attacks by Iran-backed Houthi forces, but in Syria, Trump can either bring a real threat to Iran, or see his efforts fail.

James Mattis, Secretary of Defense, once identified Syria as the strategic site to weaken Iran. In 2012 he said, “It’ll be the biggest strategic setback for Iran in 20 years when Assad falls.” Syria is the country that many Iranian leaders themselves view as their weak point. An official close to Iran’s Supreme Leader said in 2013, “if we lose Syria, we will not be able to preserve [the Iranian capital] Tehran.”

The conflict in Syria has triggered the worst global refugee crisis since World War II, so if Donald Trump truly wishes to stop the mass departure of refugees from entering the U.S. and Europe, he best option would be to address Iranian actions inside Syria.

Shlomo Bolts, policy and advocacy officer at Syrian American Council and the co-founder of Jews for Human Rights in Syria, said in an article for The Hill, February 7, 2017, “I have studied this matter extensively for the past six months. Based on my research, I believe that the Syrian refugee crisis will endure — regardless of visa bans or diplomatic agreements — as long as the Iranian presence in Syria does.”  He adds, “Many displaced Syrians fall into a category that I call ‘permanently displaced,’ meaning that their displacement was deliberate, strategic and intended to be permanent. These individuals are victims of sectarian cleansing. Even if a peace deal were reached, they would be unable to go home if the Assad regime and Iran controlled their areas.

In the town of Qusair, for example, Iranian weapons were used not in self-defense (as Zarif falsely claims) but to bombard civilians for weeks, until the situation grew so dire that the vast majority were forced to flee. Qusair residents traversed a gauntlet of sniper fire so terrifying they called it the ‘path of death’; it remains largely a ghost town today. But Hezbollah, Iran’s main proxy, has set up a military base in the area with tunnels into Lebanon.”

In the town of Madaya, where graphic images of children starving to death made international news last January, it was not made clear that those starving children had been forced, by an Iranian-backed sectarian cleansing operation, into Madaya. They had originally lived in neighboring Zabadani, where Hezbollah was constructing yet another military base.

Iran-backed foreign militants sent their own families to live in Daraya, a suburb of Damascus, after local residents fled from years of siege and the threat of extermination.

Iranian buyers flocked to purchase neighborhoods in the East Ghouta region, after they were deserted when Assad forces conquered them by force.

As the World witnessed, Aleppo City forcibly ‘evacuated’ 100,000 civilians after a bloody onslaught by an Iraqi militia whose leader vowed to overthrow the Iraqi government if Iran’s Supreme Leader requested it.

These Syrians were displaced for a purpose. Iran desires regional power, and it appears it will accomplish this through sectarian cleansing and imbedding foreign fighters who are  loyal to the Iranian Supreme Leader.

Trump’s executive order may block visa holders from Iran, Iraq, Libya, Somalia, Sudan, Syria, and Yemen from entering the United States for 90 days, but with or without a visa ban, more refugee crises lie ahead, unless Iran is not allowed to keep expanding its strength in Syria through forced displacements.

According to Bolt, “President Trump and Congress should work together to address this threat. Congress can help by passing bills related to human rights in Syria, especially the ‘Preventing Destabilization of Iraq and Syria Act,’ the ‘Iran Non-nuclear Sanctions Act,’ and the ‘Caesar Syrian Civilian Protection Act.’ Even Barack Obama said, in his speech introducing the nuclear deal, that ‘if we are serious about confronting Iran’s destabilizing activities…we need to check the behavior that we are concerned about directly’ rather than blocking the deal. The aforementioned sanctions bills do exactly that.”

“Trump should also consider more direct measures against these militias such as targeted strikes, the creation of safe zones, and increased support to anti-ISIS coalitions such as the Turkish-backed “Euphrates Shield” forces that could block Iran’s potential corridor to the Mediterranean,” Bolt states.

Stopping the flow of refugees and containing Iran seem to be two of President Trump’s foremost priorities. Acting against Iran in Syria may achieve both of them.