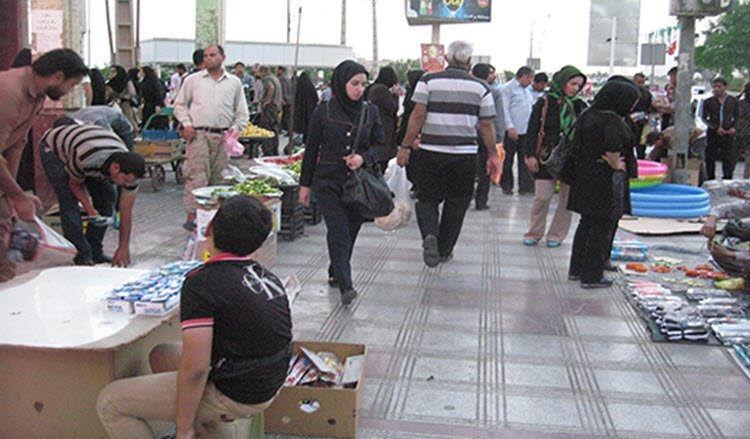 The National Council of Resistance of Iran (NCRI), privy to reports from inside Iran, have reported that street vendors in Ahwaz, southwestern Iran, have been “subject to harassment by municipal agents” during the past couple of weeks.

Municipal agents surrounded the street vendors market in Naderi Street in Ahwaz on 16th May. They prevented people from entering the market, meaning that the vendors could not trade.

This is thought to be “a reprisal against vendors who recently protested their work conditions”. On 10th May some of the street vendors on Naderi Street protested against the location of their businesses which they deem unsuitable. The previous week they gathered in front of the Governor’s building, asking for an allocated place for them to trade. They carried placards which read “Vendors have no bread, have right to life” and “A piece of justly-earned bread is our right”.

Mehdi Afravi, one of these vendors, threw himself under a train on 6th May.  Sadly, he lost his life. He was desperate as he has no other means of livelihood for his family after municipal agents confiscated his goods.

On 15th May, the Tasnim News Agency, affiliated to the regime’s Revolutionary Guards Quds Force, reported that a member of the regime’s Parliament said: “We have to acknowledge that the domestic situation, especially in the realm of livelihood and economy, is not befitting of the Islamic Iran in the region and the world. The economic growth rate is very low if not negative and the unemployment of the young, particularly the educated, is like a time bomb ticking towards zero.”

The head of the regime’s Department of Inspections, Nasser Seraj, made an announcement on 25th November 2015 via the regime’s official IRNA news agency. He said: “Someone received oil from Iran’s Ministry of Petroleum and we’re to pay the government for it, but he has taken around $30 million and run away to Canada.”