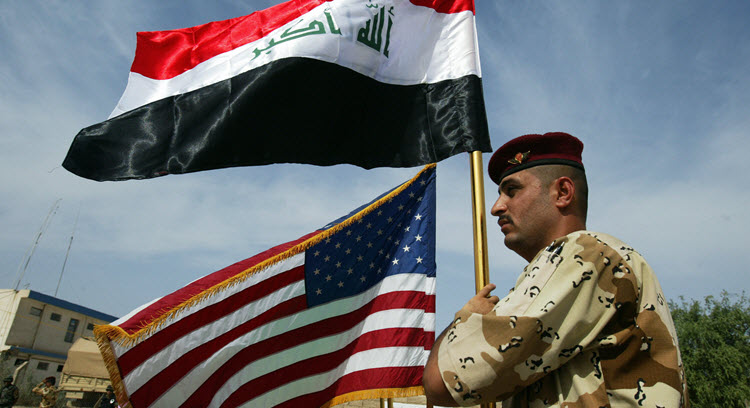 For those that thought that US forces were pulling out of Iraq and exiting their Middle Eastern presence, it will be a shock to learn that they are in fact not.

They have created an alliance with Iran and as a result of this many innocents are being tortured and have had their homes burnt down to the ground. American planes have dropped bombs and have continued to support Iran on their war against Sunni Arabs.Struan Stevenson has said this week:

“For those who thought that America was stealthily pulling out of the Middle East in pursuit of a policy of gradual disengagement pursued by Obama, a shocking truth is beginning to unfold. Far from disengaging, the Obama administration has for some time now actually been forming a de facto alliance with Iran in its war against the Sunni Arabs.

“Exploiting the conflict against Daesh (ISIS) as an opportunity to ethnically cleanse the Sunni Arab population of al-Anbar and other provinces in Iraq, the Iranian regime has poured military personnel and resources into the sixty separate and predominantly Shi’ite militias operating in that country. These militias, commanded by the Islamic Revolutionary Guards Corps Qods Force leader – General Qassem Soleimani – have arrested, tortured, butchered and beheaded many thousands of innocent Sunni men and even boys, during their fight to ‘liberate’ the Iraqi cities of Tikrit, Ramadi and Fallujah. The few houses that are left standing, following relentless bombing by American aircraft, are being burned down by the sectarian Shi’ite militias. Iran and its so-called allies are ruthlessly razing these once great and ancient Iraqi cities to the ground and virtually annihilating their occupants.

“The leader of one of the Iranian-backed Shi’ite militias said last week: “There are no patriots, no real religious people in Fallujah. It’s our chance to clear Iraq by eradicating the cancer of Fallujah.” This is the reality of the Iranian regime, which the Obama administration is trying to have rapprochement with; it is a regime hell-bent on a campaign of genocide across Iraq, Syria, Libya, Lebanon, Palestine, Yemen, Bahrain and ultimately Saudi Arabia and Israel. Obama’s desperate push to sign the nuclear deal with Iran should have been the clearest signal to the world that he was carving out a new and dangerous alliance. The lifting of sanctions and the unfreezing of Iranian assets, released a windfall of billions of dollars that the mullah’s regime can now use to reinvest in their regional campaigns to bolster Bashar al-Assad in Syria, back the Shi’ite militias in Iraq, finance and arm Hamas in Palestine, and the Houthi rebels in Yemen. Iran exports terror and America has unlocked the funds that enables it to do so with renewed vigour.

“This week Iran’s Supreme Leader, Ayatollah Khamenei dismissed, General Firoozabadi, the Chief of the armed forces and replaced him with General Bagheri. The Iranian media state that one of the goals of this change is to strengthen the Qods force.

“The next target for the Iranian-backed militias is Mosul, Iran’s second largest city and home to over two million Sunnis. American airstrikes have already begun around the outskirts. An unprecedented human catastrophe will quickly develop unless the West wakes up and exposes American duplicity. The only way to combat Daesh (ISIS) is to recruit and engage the Sunni tribes in Iraq. They are best placed to root out the Daesh terrorists who have occupied their homeland for the past two years.

“But the Sunni tribal leaders have good grounds to believe that America has now joined forces with Iran to wage war on the Sunni Arabs and they will be reluctant to help a coalition that may inevitably lead to their own destruction at the hands of sectarian Iranian-backed Shi’ite militias. US Secretary of State John Kerry on Tuesday deemed Iran’s presence in Iraq to be “helpful” to American attempts to beat back the threat of Daesh (ISIS)!

“The European Iraqi Freedom Association condemns any support for Iran and calls on a complete re-think of US Middle East policy before it is too late. Involving the Iranian regime and its militias is a big mistake which will create a greater crisis in the region”

Stevenson is the President of the European Iraqi Freedom Association (EIFA). He strongly condemns American Policies in use in the Middle East.

If not, it may be too late. Having Iranian militias there is a massive mistake, one that is helping to contribute to other atrocities, and crimes of war.