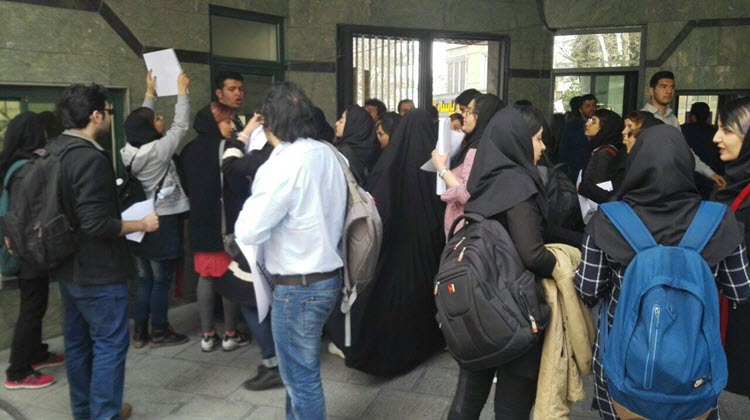 On Saturday 4th March, students of the Faculty of Literature at Allameh University in Tehran protested against gender segregation and inappropriate and illegal treatment.

They issued a statement about their protest. Part of it read:

“… The Nazis sent Jews to gas chambers to kill them and within a few minutes or a few hours their lives would be gone, but agents of the regime, day after day, trample upon the dignity and humanity of students! Countless people protested the methods of the Nazis because they saw the death of humanity. Shouldn’t we protest today against the ugly behaviour at Allameh Tabatabai University?”

Later in the statement the students say: “When we hear the expression ‘wanted’, our minds depict the image of a criminal, those who might have committed murder or armed robbery, but the authorities of Allameh University use this expression to include all students, especially female students. They outrageously monitor students off-campus, both in real life and in cyberspace. In their minds everyone is a dangerous criminal! Yet there is no law allowing them to do so! What are the reasons for this ugly behaviour? Not specified! Of course from the people who want to maintain their positions in any way, do not expect much else!”

The students condemned the suppressive nature of the regime and especially its actions against female students. They wrote in their statement: “Today, March 4, 2017, we, the students of the Faculty of Literature at Allameh University, warn that we will not accept this inhumane treatment and will not stay silent faced with your ugly behaviour. From today, we are fighting back and we do not relinquish our legal rights. Regarding any claims by the authorities that we are breaking the law in real life or in cyberspace, we are not afraid and will fight any unethical and illegal behaviour with an iron fist.”

They added: “We know the root of these issues is gender discrimination. Discrimination that includes entry to and exit from an academic environment! We warn that we will fight this discrimination more than before and as long as the University breaks the law, we will not withdraw an iota.”