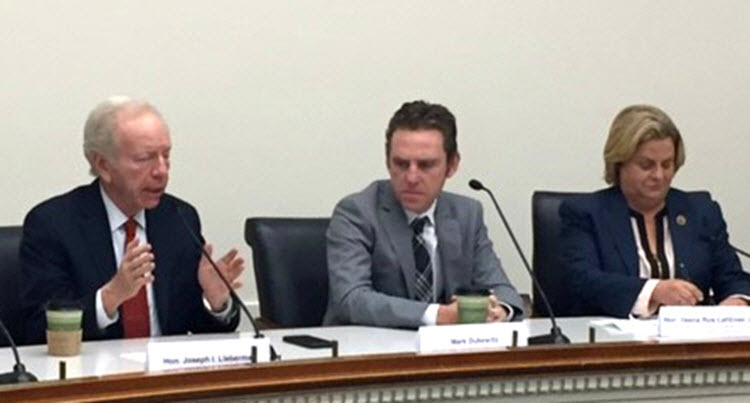 On 7th December at Capitol Hill, a briefing took place about the future of Iran policy. It was hosted by United Against Nuclear Iran (UANI) and the Foreign Policy Initiative (FPI).

Rep. Ros-Lehtinen said that as a new phase of sanctions for Iran begins, Congress plans to keep and enforce the current sanctions that are in place but expand on other non-nuclear ones.

Rep. Engel said that bipartisan support for holding Iran accountable for its interference in the Middle East exists and continues. Engel warned against retracting the deal, as suggested by Trump, saying that the United States has the opportunity with the deal in place to deal with Iran’s “malign” behaviour.

Chairman of UANI, Senator Joseph I. Lieberman, led a panel with Mark Dubowitz from the Foundation for Defense of Democracies (FDD) and J. Matthew McInnis from the American Enterprise Institute (AEI).  Lieberman reiterated the necessity of consulting and including Israel and allied Arab states in discussions regarding Iran. These nations have huge stakes in the region and will be affected in one way or another.

He also called for a stricter policing of the Iran nuclear deal, and the designation of the Islamic Revolutionary Guard Corps (IRGC) as a foreign terrorist organisation. He would also like to see sectors of the Iranian economy that are involved in the ballistic missile program be sanctioned.

Lieberman added: “When it comes to our relations with Iran and the goal of stopping Iran from ever becoming a nuclear power, the coming of the Trump administration represents a sea change, and from my point of view, a sea change in the right direction.”

Dubowitz said that the election of Trump has caused “fear, uncertainty, and doubt” for the Iranian regime and the P5+1. Businesses looking to re-enter the Iranian economy are also likely to view Trump’s election as negative.

Regarding the IRGC, he said: “There are only 25 IRGC companies that have ever been designated by the Office of Foreign Assets Control in the Treasury, despite the fact that my organization has identified 575 IRGC companies that are eligible for designation. Treasury should be right off the bat in February, once everybody’s in their seats, massively accelerating the number of IRGC designations, from 25 to 250 to 2500.”