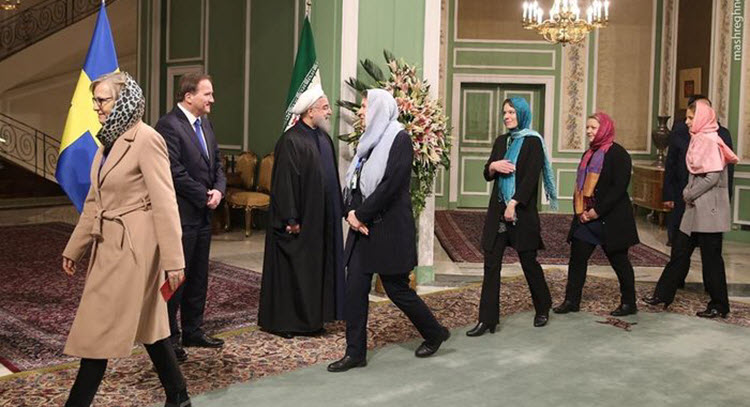 When the leaders of United Against Nuclear Iran (UANI) learned that Swedish Prime Minister Stefan Löfven was preparing to lead a delegation of business representatives to Iran on February 11-12, a full-page message in the prominent Swedish newspaper Dagens Nyheter, cautioning the group about Iran’s extensive human rights abuses was released.

Sweden’s Liberal Party leadership has concerns regarding Iran’s human rights abuses, particularly its rate of domestic executions, one of the highest in the world. Iran executed nearly 1,000 people, according to a UN Human Rights Council report in 2015. UANI’s ad notes this, as well as outlining numerous severe business risks.

UANI, the independent, not-for-profit, non-partisan, advocacy group founded in 2008 is part of a broader global campaign to educate business leaders worldwide about the dangers of doing business with the Iranian regime. “While Prime Minister Löfven invests time and effort into strengthening Sweden’s relationship with Tehran, he must not ignore Iran’s role as the leading state-sponsor of terrorism, nor the countless crimes committed against its own people,” said UANI CEO Ambassador Mark D. Wallace. “Swedish businesses have previously severed ties with Iran due to its violations of international law. It is foolish to think anything has changed, especially in the wake of the Tehran’s latest missile testing and ongoing aggression towards innocent civilians.”

UANI successfully pressured the Volvo Group to end its Iran business in 2013, when photographic evidence showing the regime using Volvo equipment and technology to transport Iranian missiles came to light. However, it’s been reported that Volvo subsequently resumed business in Iran in 2015.

UANI Chairman and former U.S. Senator Joseph I. Lieberman said, ”The continued aggressive, confrontational rhetoric and behavior emanating from Tehran should give Swedish leaders serious pause. Iran poses a threat not only to its own people, but to the much larger international community. Prime Minister Löfven and Swedish business leaders would be wise not to rush to broker new deals that could be upended by new sanctions.”

Volvo and its subsidiary Mack Trucks have received more than $200 million in U.S. Federal Government contracts since 2000, of which 90 percent came from the U.S. Department of Defense. Prime Minister Löfven’s efforts to boost economic ties with Tehran comes as Volvo Group, and Mack Trucks, are reportedly laying off hundreds of American workers across Maryland, Pennsylvania and Virginia.