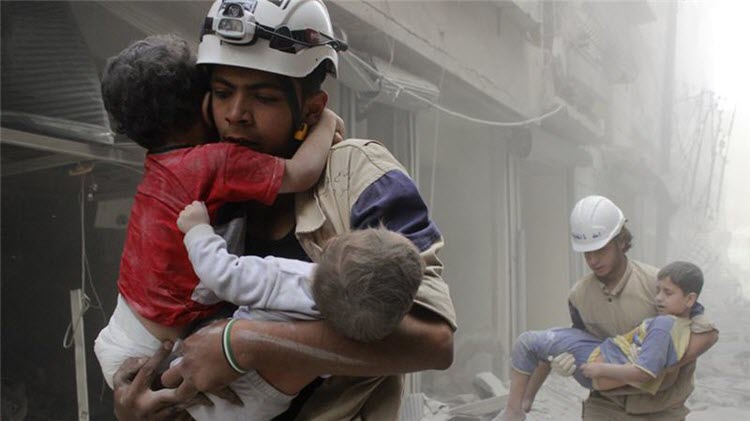 A group of Syrian aid volunteers have accused the Syrian dictator, Bashar al-Assad, of purposely targeting rescue workers and aid centres, according to an article by the National Council of Resistance of Iran (NCRI). These volunteers say that the Iranian regime is backing Bashar al-Assad in the violent conflict in the city of Aleppo.

The White Helmets, or the Syrian Civil Defence group, aim to save the lives of innocent people who have got caught up in the attacks on residential areas. While Assad’s forces carry out air strikes the White Helmet volunteers put themselves at risk to save the lives of the innocent people trapped under rubble. They then give the victims safe refuge. Up until now they have pulled around 41,000 people from the rubble.

In recent weeks, the White Helmet volunteers are finding their work more and more difficult as the conflict in Aleppo has intensified. Unfortunately some of the volunteers have fallen victim to Assad’s attacks.

The local Aleppo Free Council and representatives of the White Helmets force, on Sunday, gave a press conference where they described the disturbing and traumatic reality of what was happening in the city. They called on the perpetrators to be persecuted for the war crimes they are involved in.

Head of the White Helmets in the province, and lawyer, Ibrahim Hilal spoke to the Iranian opposition satellite channel Simaye-Azadi about the recent attacks in Aleppo. He said that he wanted to draw international attention to the crimes committed by not only the Syrian regime, but also the Iranian regime and Russia. Their warplanes, he said, have carried out more than 300 aerial attacks on the city, not to mention the 65 barrel bombs, 110 artillery rounds and 17 surface-to-surface missiles.

Mr. Hilal said that 206 people have died and more than 500 have been injured. Warplanes are targeting critical and civil infrastructures, hospitals, rescue teams, schools and mosques. He said: “We have urged international organizations and the world community to uphold their responsibilities and force the regime to stop its crimes against the people of Syria. There is a systematic international silence in the face of the crimes of the Syrian and Iranian regimes and Russia.”

He highlighted that the city of Aleppo is in a very delicate situation because the warplanes are still there. He said that they are attacking the frontlines and that “Aleppo is under siege”. Recently, Syrian jets had demolished a White Helmet centre causing the death of five volunteers and injuring many others.

Since the recent spike in violence in Aleppo, the White Helmets have carried out more than 330 rescue operations.