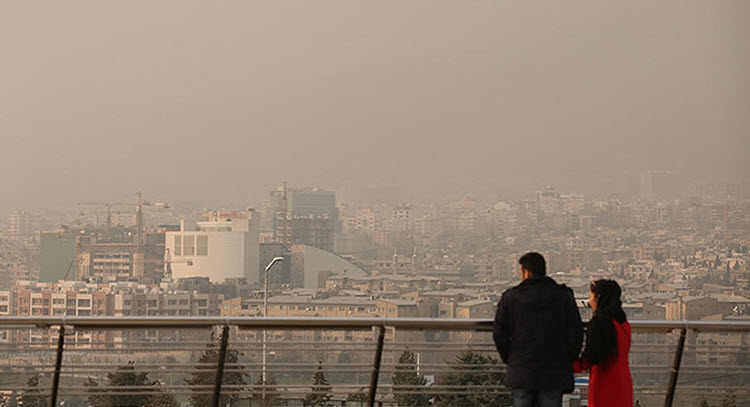 Iran’s capital Tehran has been covered in a cloud of toxic smog for five days now, with schools remaining shut on Wednesday.

Many civilians have had to stay at home and traffic disruptions have occurred across the city. People on the streets are required to wear a gas mask to protect themselves against the toxic fumes.

Reza Shajiee, a well-known socialite from Tehran with a large following on Instagram, posted a picture of himself on the social network, showing him in a gas mask, worn under his motorcycle helmet. He wrote: “My city is better than yours, its air is better than yours,” in an attempt to protest against someone without a clear idea of who exactly to blame for this complex and devastating problem.

The issue with the smog levels in Iran (and especially Tehran) is not unique to this year, which is why it’s difficult to know who to blame for this catastrophe. According to Phys.org, every year Tehran suffers from an onset of “temperature inversion” when the temperatures drop, as the autumn season approaches. The pollution from 10 million cars and motorbikes is trapped above the city, in a cloud of warm air.

The particles in the smog PM2.5 which can penetrate the lungs have reached a record level of over 150 in Tehran – this is a dangerous and toxic amount that can lead to diseases such as lung cancer and heart problems. The filmmaker Dariush Mehrjui shared his views on the extent of the problem with ISNA news: “I can’t breathe in Tehran, simple as that,” he said. “Everyone is fleeing Tehran … everyone is choking, look at cancer rates. Who can live [in Tehran] under these circumstances?”

But the problem doesn’t just affect Tehran – people in many cities are endangered by high pollution levels. According to the World Health Organisation, the Iranian city of Zabol holds the highest score of PM2.5 air pollution, making it the highest in the world.

Because the problem is so familiar and so complex, the Iranian regime authorities are at a loss on what to do to solve it. According to Khosrow Sadeghniyat, an official from the Health Ministry who spoke to Asr-e Iran news, it is advisable for the citizens of Tehran to stay indoors, eat vegetables and drink milk in order to “strengthen the body.” Iran’s Supreme Leader Ayatollah Ali Khamenei has taken further measures by issuing a religious law that cars should not be driven during this time of crisis unless there is a good reason for using them. But these are all short-term solutions to deal with the crisis at hand.

More prominent and long-term measures need to be put in place, to prevent this toxic level of pollution that endangers people’s lives every year. According to a member of the City Council, 412 people have already died from the pollution over the last 23 days from respiratory and heart conditions, related to the pollution levels. It is estimated that each year, the pollution levels cause 45,000 premature deaths across Iran. Health experts have also argued that the rise in air pollution levels over the last 10 years have led to many more cases of lung and bone marrow cancer.

Rapid attention is needed from the Iranian government, to stop pollution endangering the lives of its citizens.