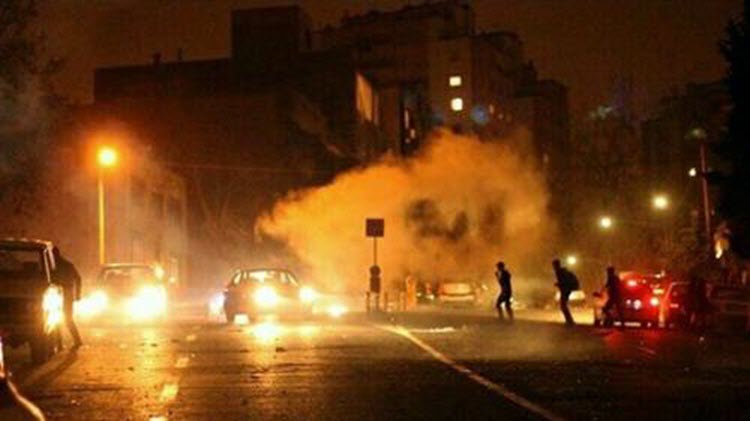 Expressing his fear of youth protests on the Fire Festivals, Tehran Police Chief Brigadier General Hossein Sajedinia resorted to threats, saying that “after coordination, Tehran Prosecutor has personally written a letter to me, authorizing police to, in case of disturbances, seriously deal with norm-breakers and hold them in police custody till the end of New Year’s holidays.”

He imploringly asked the families to avoid using any firecrackers as far as possible, and take the opportunity to get together and hold family soirees. And if their children are willing to attend passages, make sure that they only attend the alley where they live, as police won’t allow any streets, even side ones, to be blocked.

On Tuesday, March 14, Iranian people held Fire Festival ceremonies in various cities in the face of the mullahs’ regime; thereby symbolizing their loath for this suppressive and anti-Iranian regime. The following are parts of reports received from Iran.

On the eve of the festival of fire on Tuesday, March 14, 2017 in the Iranian capital, Tehran, a number of local youth who had gathered on the Air Force Fifth Street to celebrate the annual Festival of Fire of the ancient Iranians clashed with the security police who were out in force to prevent the public to carry out their festivities.

According to reports from the notorious Gohardasht prison, the suppressive prison warden has, as his usual in every year, prevented the prisoners from going outside their cells to take a breath of fresh air on the eve of the Fire Festival celebrations. The warden fears that the prisoners might light up fire and celebrate the Fire Festival. But the political prisoners defied these suppressive measures and lit fire inside the hallways and jumped over the fire in celebration of Feast of Fire.

The prisoners chanted ‘death to the dictators’, and ‘Death to Khamenei.’

The sound of fire crackers and squibs are so loud that has turned the streets into a battle ground between the public and the suppressive security forces.

According to a report from Isfahan, central Iran, the city has turned into a battle ground between the youth who are adamant to celebrate the Feast of Fire Festivals on the last Tuesday of the solar year against the suppressive revolutionary guards who are keen to prevent the people from having their celebrations.

A reporter for the Iranian Resistance (MEK) says as you walk around the city you can witness local youth are setting up fire crackers and other fireworks at every corner, defying the suppressive rule of the mullahs. There is so much smoke from these fireworks that it is not possible for the authorities to stop the people from having fun.

Mostafa, a taxi driver says ‘I hear sound of fire crackers and the Hissss of the rockets everywhere I go. The city looks like a battle-ground.’

‘Despite the authorities’ efforts to stop these festival by scaring the people of fire to the buildings and themselves, nobody is listening and people are by all means ignoring mullahs’ measures to stop the festivities,’ Mostafa added.

These, despite the authorities warning not to hold the celebration, because they fear that the occasion would be used to for an uprising by the people. The sounds of the fireworks can be heard all around the city and suppressive security forces are unable to stop the people fearing any clashing with the youth could go out of control and turn in to a huge riot.