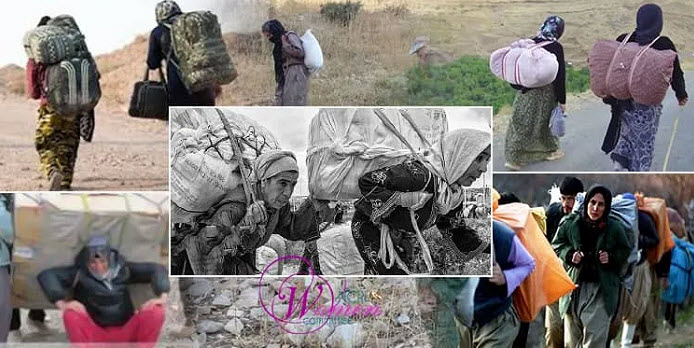 One must carry 40 kilos on their back and travel along difficult mountain paths as part of the job. Workers will receive up to 400,000 tomans if they arrive safely at their destination. A porter’s salary is paid on a daily basis. The money is given to them on the day they work.

“There are more than 100,000 porters in Kurdistan,” according to a lawyer researching the subject. This means that the lives of 40,000 to 100,000 women and families are intertwined with the problems of porters and their traumatic lifestyle.”

The Kurdistan Press Agency published a study on the situation of women in porter families, which included nine women who currently live or have lived with porters. The group included three wives and a mother who live with a disabled porter, as well as four women and a mother whose husbands and sons were killed on the job.

The interviews with these women in the provinces of West Azerbaijan and Kurdistan reveal horrific realities about the lives of the women in porter families. According to all nine women from porter families, their poverty and deprivation forced them to do this work.

The families of two disabled porters were forced to seek public assistance to cover their hospital expenses. Two female heads of households, as well as the daughter of one of the deceased porters, live on a meager tailoring income.

Long-term suffering and trauma have become a way of life for women in porter families due to a lack of economic stability and security. These women are exhausted psychologically, socially, and mentally as a result of their constant distress, restlessness, mixed feelings of rejection, and abandonment.

“We really can’t live like normal people anymore,” one of the porters’ wives told the researcher. “I don’t remember when we had fun, when we were together, and when we went on a trip. I’m always worried that something bad will happen to my husband. I don’t sleep until the morning on nights when he goes to the border.

I’m just waiting for that phone call that tells me something bad has happened to him. My husband is currently ill and in the hospital. This is what a porter’s life is all about: stress, frustration, worry, scarcity, and poverty!”