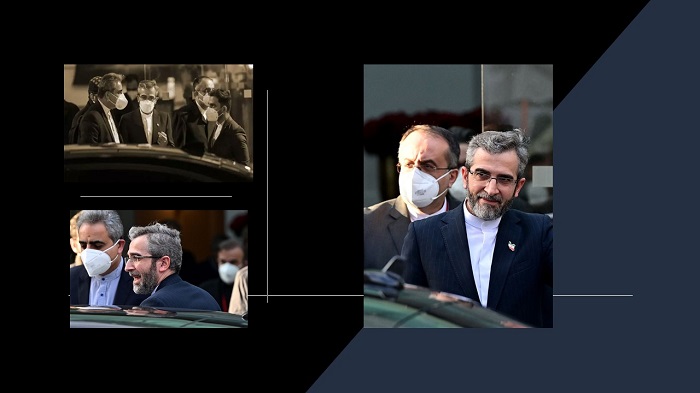 The Iranian regime’s officials and media have expressed alarm in the hours since the Russian invasion of Ukraine that the crisis could derail nuclear talks to the regime’s detriment.

The Iranian government’s concern about the Ukraine conflict and its impact on the Vienna nuclear talks was conveyed in an article on the state-run Diplomacy Irani website titled ‘The revival of the JCPOA was sold to the Ukrainian war.’

Leaving aside the economic and political dimensions of this issue, if one considers the Vienna nuclear talks to be the world’s second most sensitive international issue after the Ukraine crisis, it is safe to conclude that it will have a significant impact on the Vienna discussions.

Many political analysts and observers believe that the Russian representative in the talks has become the unofficial speaker of the Iranian government and is taking public positions in favor of the regime in the more than 11 months since the Vienna nuclear talks in the form of eight rounds of talks ended.

Russia has also demonstrated in practice that it prefers to play on the Iranian regime’s turf when it comes to the nuclear case and related negotiations, rather than on the turf of the regime’s adversaries, thereby exacerbating the situation by giving the regime more time to get closer to a nuclear weapon.

Russia’s participation in the Vienna nuclear talks will almost definitely be considerably limited now that it has initiated a military offensive against Ukraine and has further isolated itself in the international arena.

#Iran Regime’s Experts Are Concerned About the Impact of Ukraine Crisis on the Nuclear Talks
via @Iran_Focus #JCPOA https://t.co/hmYUBFUHMh

However, according to US State Department spokesman Ned Price, Russia’s invasion of Ukraine should not give Iran permission to build nuclear weapons.

Heshmatollah Falahatpisheh, the ex-chairman of the National Security Committee of the Iranian Parliament, stated in Diplomacy Irani that Raisi’s administration officials believe the US and Europe would finally reach a deal with the Iranian regime and grant greater concessions.

They don’t want to be witnesses to any more international conflicts. The US and Europe, they believe, cannot properly focus on the Ukrainian situation unless and until the nuclear crisis with Iran is resolved.

The reality on the ground, on the other hand, is quite different. To put it another way, boosting these expectations will, ironically, make Europe and the US react negatively to the regime’s maximalist stance. The regime’s media outlets and officials are growing increasingly apprehensive about the nuclear talks being harmed by the Ukrainian situation.

On February 27, 2022, the state-run daily Jomhouri Eslami warned the regime and recalled Russia’s actions against the regime. “Under Mr. Putin, the Russians voted in favor of UN Security Council resolutions against Iran,” it said. Even now, the Russians want to oversee the JCPOA talks, as if they had always prevented Iranian gas from reaching Europe, and they have shifted the equation in Syria to their advantage. They have reaped the greatest profit from the regime’s hostility toward the West, and they intend to use it as a winning card for greater speculation on Iran’s nuclear program by invading Ukraine.”

“The question is no longer whether we should stay in the negotiations or not,” Parliament Speaker Mohamad Bagher Ghalibaf said the same day, expressing the same concern. We should continue to negotiate and move the process ahead. Some of our demands have been addressed throughout the negotiations, but there are still issues to be handled. The negotiations have not yet been completed, and the outcome of the negotiations must pass through the system’s approval phases.”

Following a meeting of the regime’s Supreme National Security Council, official media stated that Ali Bagheri, the head of the regime’s nuclear-negotiating team, would return to Vienna on February 27, to resolve the outstanding obstacles that were preventing a deal.