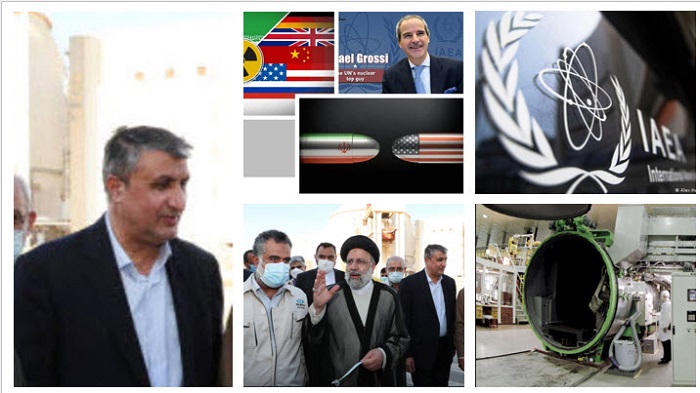 The state-run news agency ISNA stated in their most recent article, quoting the regime’s Atomic Energy Organization chief Mohammad Eslami, “This is an entirely domestic project that will close the chain of research, evaluation, testing, and production of nuclear energy in Iran.”

This makes it abundantly clear that the regime intends to break the terms of the commonly referred to as the 2015 nuclear deal or Joint Comprehensive Plan of Action (JCPOA).Despite the regime’s repeated claims that its nuclear program is only for peaceful purposes, it has been purifying uranium to a level of up to 60% purity, which is merely a technical threshold for purifying it to a level of up to 90%, which is the level needed to produce weapons-grade uranium.

The International Atomic Energy Agency (IAEA) stated that the majority of the regime’s enriched uranium is being transported to Isfahan’s Atomic Center while expressing concern over the regime’s nuclear development.

It is important to note that, as reported on July 26 by the regime’s Fars news agency, the regime gathered and wrapped cameras that were being watched over by the IAEA, the United Nations’ nuclear watchdog.

The US government and other Western nations have repeatedly disregarded IAEA warnings that the regime is getting closer and closer to building a nuclear weapon. This sincere worry and the warnings that followed are based on actual evidence of the regime’s JCPOA violations, which began as soon as the initial agreement was made in 2015.

When asked how the regime misled the international community, Ali Akbar Salehi, the then-head of the Atomic Energy Organization for the regime, stated in January 2019: “For three years we have been saying we did not pour cement into the Arak heavy water reactor. The Arak reactor would be destroyed if we had it.

The National Council of Resistance of Iran (NCRI) declared on September 4, 2015, “Tehran is collaborating with North Korean specialists to mislead the United Nations nuclear inspectors who are visiting suspected Iranian sites.

The Iranian government, seeking advice from Pyongyang, has reportedly been working on strategies to conceal the military component of its nuclear projects from the IAEA for some time. Even So, it is legitimate to be concerned and raise the alarm about the regime’s plans to construct a new site in Isfahan, even if they are disguised as research.

The Iranian Resistance examined an instance of the regime’s dishonest plans in response to the IAEA, citing the regime’s scheme to deal with the so-called EBW detonators by attempting to claim the explosive detonators were intended for the oil and gas industry.

These are just a few examples of the regime’s violations of the agreement after it was signed. The international community is at risk due to more than just the regime’s weak agreements and appeasement measures.

What we haven’t mentioned is the regime’s ongoing repression of the Iranian people, because the JCPOA excludes the regime’s human rights violations. Therefore, any new agreement or revival of the 2015 deal will only make things worse and pave the way for a future dominated by hostility.