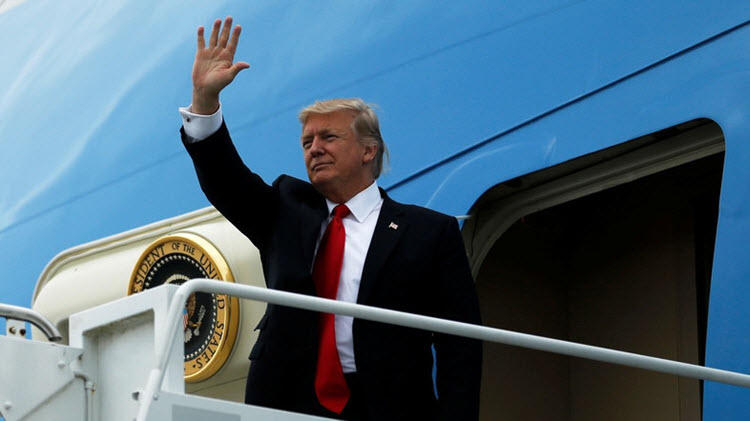 Riyadh will want assurances that the U.S. will continue its harsher tone toward Iran and continue its pressure to stop Tehran’s destabilizing activities in the region.

The U.S.-Saudi alliance has been shaky after U.S. withdrawal from the region, which was perceived as the U.S. leaning toward Iran, as well as a lack of direct action against Iranian ally, Syrian President Bashar al-Assad.

An article in REUTERS says that, “Saudi Arabia will also want to showcase high-profile investment deals with American companies to show progress on its ambitious “Vision 2030” economic and social reform agenda, while Washington says U.S. arms sales arms worth tens of billions of dollars are in the pipeline.”

Trump’s visit is the first stop on his first international trip since taking office in January. Officials of both countries are eager to highlight the symbolism of the American president choosing to visit the birthplace of Islam as his first stop, rather than to neighbors Canada or Mexico.

After he issued a ban that was blocked by U.S. courts, prohibiting entry into the United States by citizens of several Muslim-majority countries, citing national security concerns, critics have accused Trump of being anti-Muslim.

Saudi Arabia has not fully recovered in the U.S. public’s opinion after the September 11, 2001 attacks. 15 of the 19 hijackers were Saudi. Last year, the U.S. Congress passed the Justice Against Sponsors of Terrorism Act, which permits lawsuits holding Saudi Arabia responsible for the attacks, altough the Saudi government denies involvement.

Reuters writes that according to a senior Saudi official, “Trump’s visit sends a clear message that the U.S. is standing with its close allies in the region and that they’re not abandoning them.”

“This (new) administration comes in and … says, ‘No, wait a minute, Iran is active,” the official said, referring to Gulf states’ views of Iran’s involvement in regional conflicts in Syria, Iraq, Bahrain and Yemen.

Trump has called the nuclear agreement with Iran “the worst deal ever negotiated,” and senior administration officials have criticized Iran’s support for Assad, its ballistic missile activities and its support for militant groups in the region.

Reuters writes that, “Saudi Arabia will also be looking for further U.S. support in the war in Yemen, where a Saudi-led coalition has been fighting the loosely Iran-aligned Houthi group and troops loyal to former President Ali Abdullah Saleh to restore the internationally-recognized government to power. The Obama administration backed Saudi Arabia when it launched air strikes in Yemen in March 2015 but grew sour as it saw the number of civilian casualties grow and curtailed some military support to Riyadh.”

The Saudi official said further, “we don’t get criticized about the war in Yemen” by the Trump administration.

A senior White House official told Reuters, “In Trump’s meeting with GCC leaders, the discussion will revolve around how to strengthen the structures of the group, which includes Bahrain, Kuwait, Oman, Qatar, Saudi Arabia and the United Arab Emirates, to be more effective.”

National Security Advisor H.R. McMaster said on Tuesday that the president will dine with Saudi royal family members, along with his wife, Melania Trump.

Trump will also participate in a Twitter forum with young people. Additionally, he plans to deliver a speech on “the need to confront radical ideology” and participate in the inauguration of a new center intended “to fight radicalism and promote moderation,” McMaster said.

Reuters reports, “While Trump has criticized Saudi Arabia for not paying enough for U.S. military support, he has been silent since becoming president about its religious conservatism. Traditional Wahhabi doctrine is ultra-conservative, imposing a strict version of Islamic law and urging resumption of early Muslim practices.” Reuters adds, “Radicalization of Muslims in the world’s top oil exporter has led to domestic attacks and the involvement of Saudi citizens in jihadist movements in Iraq and Syria.”

In Riyadh on Saturday, an inaugural Saudi-U.S. CEO forum will be held in in which several deals are expected to be signed in defense, electricity, oil and gas, industrial and chemical sectors. New licenses will also be issued for U.S. companies to operate in the Kingdom. Saudi Deputy Crown Prince Mohammed bin Salman is the face of “Vision 2030” and is eager to showcase the kingdom’s success a year after its inception.

According to the White House official, the kingdom is in the final stage of negotiating a $100 billion arms deal.

Also expected to visit Saudi Arabia after Trump, is the New York Stock Exchange delegation, who is trying to lure a listing by Aramco, slated for 2018 and worth about $100 billion, says Reuters. “World stock exchanges are vying for slices of Aramco’s initial public offering, expected to be the largest in history, with Hong Kong currently the frontrunner among bourses in Asia because of its strategic links to key Saudi oil importer China.”