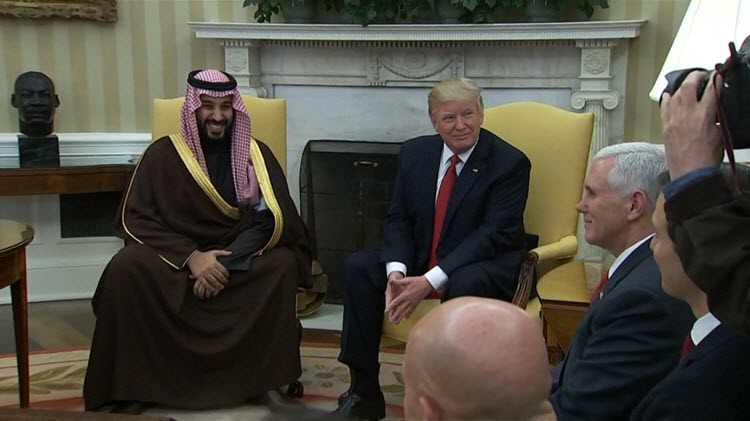 In a “historic turning point” in relations between the two countries, the Deputy Crown Prince of Saudi Arabia Mohammed bin Salman has just been welcomed to the White House by US President Donald Trump.

The meeting on Tuesday incurred moments of tension and a difference of opinions, but the next day issues were on the way to being resolved. In a statement, a senior advisor to the Prince said that on the first day of meetings “relations had undergone a period of difference of opinion” but the following day issues were “on the right track, and marked a significant shift in relations, across all political, military, security and economic fields”.

Relations between the two countries became strained during the presidency of Barack Obama who pioneered the Iran nuclear deal. President Trump’s “great understanding” of US-Saudi relations shows that the US wanted to repair relations that were damaged by the previous administration.

Trump’s administration see Saudi Arabia as a “crucial part” of the Middle East and sees a relationship with the kingdom as a positive thing.

A fellow at the Washington Institute for Near East Policy and director of the institute’s Gulf and Energy Policy Program, Simon Henderson, said that the Trump administration is well aware that there will be “irritants in the relationship”, but overlooks this to see the bigger picture regarding a beneficial relationship. Henderson added: “This is at odds with the Obama administration, so they want to make that clear distinction.”

Aramco, or Saudi Arabian Oil Co., is preparing for a potential record initial public offering with reports of as much as $100 billion in shares being sold.

Iran and Saudi Arabia share similar opinions about the danger of the Iranian regime, the spread of terrorism and the security risk it poses to the region.

Both Saudi Arabia and US officials have spoken frankly and openly about their concern over Iran.