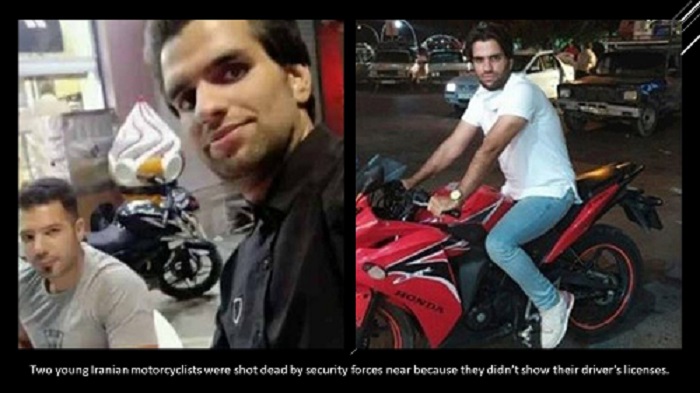 Two young Iranian motorcyclists were shot dead by security forces in Shahriar near Tehran because they didn’t show their driver’s licenses. Alireza Goudarzi, 27, an electrician, and Alireza Jafarlu, 25, a college student and store owner, died after security forces opened fire on them in Keshavarz Square, with Goudarzi killed instantly.

Jafarlu was severely wounded, but security forces beat him with batons, as well as punching and kicking him, rather than calling an ambulance, even though he was already handcuffed. He died from internal bleeding before he could be seen by a doctor.

The Iranian regime’s state security forces shot and killed two young motorcyclists on Friday, August 21, in a town near the Iranian capital Tehran for the sole reason that they had not shown their driver’s licenses.#Iran#HumanRightshttps://t.co/ZQRgyEPcrd

People around tried to help Jafarlu, who was calling out to be taken to a hospital, but security forces threatened to shoot anyone who came close. When the ambulance arrived 40 minutes later, Jafarlu was dead.

An eyewitness said: “It was 4 am and both were passing through Keshavarz Square, returning from a night of work at Jafarlu’s residence, where Goudarzi had carried out some electrical repairs during the night. The police asked them for their driving license but since Jafarlu didn’t have his documents with him, he tried to leave the scene. The police immediately targeted their upper body. Goudarzi died instantly after they shot him in the back. Alireza Jafarlu was also hit in the back and shoulders. The bullet to his shoulder injured his lungs.”

Reports from #Iran indicate the regime’s State Security Forces (SSF) shot and killed two young men in Shahriar near Tehran. This action along with the regime’s recent executions, although tragic, show the mullahs’ fear of the society. #IranProtests https://t.co/wmiPjWRSjn

The regime’s authorities have refused to hand over the men’s bodies to their families and told them to wait for the forensics report, but the families bravely filed complaints against the police anyway, noting that the police officers involved were supposedly outside of their jurisdiction when they launched this brutal attack.

This is far from the first time that the regime has attacked people just trying to do their job or go about their lives, even though Article 7 of the Iranian penal code states that law enforcement should only use firearms when necessary.

It reads: “Agents who are subject to this law must target the legs when deemed necessary to use firearms. They must be careful so that the shooting would not lead to death and other people who are not involved must not be harmed… The State Security Force is responsible to take care of the wounded. They must be taken to medical centers, as soon as possible.”
There are almost daily reports of police and border guards shooting and killing porters in the border region between Iran and Iraq.

Shahriar was hard hit in November 2019 uprising. It appears the regime is running scared of anyone who might appear to be a supporter of the MEK resistance units.

In Iran, the existence of MEK resistance units organized by the People’s Mojahedin Organization of Iran (PMOI / MEK Iran) has meant that many of the recent protests have been well coordinated.

The growing number of protests across Iran is a clear sign that the corrupt regime of the mullahs is on its last legs. Just when they will succumb to a new and even more powerful uprising is hard to say but it could come sooner than many have thought possible.