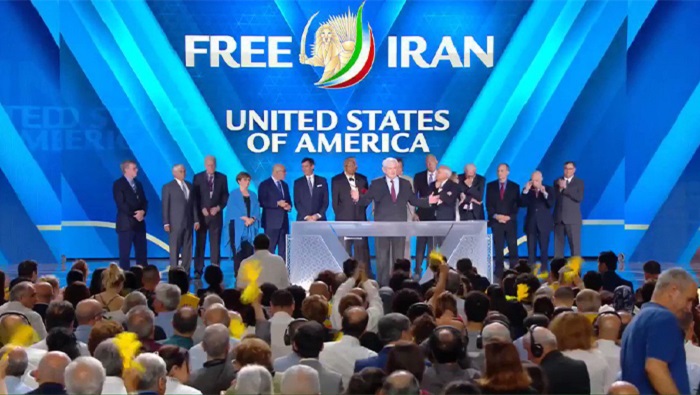 According to Reuters, which cited the Iranian regime’s Foreign Ministry, 61 additional Americans have been subject to sanctions by the Iranian regime for their support of the People’s Mojahedin of Iran (PMOI/MEK), the Iranian opposition group. Prior to the MEK’s relocation to Albania in 2016, most of the sanctioned American dignitaries opposed the U.S. State Department’s politically motivated and factually incorrect designation of the PMOI/MEK as a foreign terrorist organization.

Americans have been congratulating one another and joking about the designation while mocking Tehran’s most recent sanctions.“First Russia, and now Iran has sanctioned me. A badge of honour. The regime in Iran terrorizes its own people and is the largest exporter of terror in the world. I long for the day when Iran will be democratic, secular, non-nuclear, and at peace with its neighbours, said U.S. House of Representatives Member Don Bacon.

First Russia, and now Iran has sanctioned me. A badge of honor. The regime in Iran terrorizes its own people and is largest exporter of terror in world. I yearn for the day when we have a democratic, secular and non-nuclear Iran that is at peace with its neighbors. @mdubowitz pic.twitter.com/HJARTHIYBD

Former US Under Secretary of State for Arms Control and International Security Ambassador Robert Joseph said he is honoured to be on the Iranian regime’s list of sanctioned individuals, emphasizing that this shows he stands with the Iranian people.

The U.S. State Department’s former Coordinator for Counterterrorism, Ambassador Nathan Sales, mocked Tehran’s most recent action and questioned why it had taken so long. He adds that he is honoured to be a part of this distinguished group.

The media has characterized the Iranian government’s pitiful action as most symbolic, which begs the question of why they would do such a thing.

Congrats to my old boss, former Secretary of State @mikepompeo (#1), my friend & colleague @AmbNathanSales (#12), and the bipartisan group of 59 other great #USA🇺🇸 citizens on being “sanctioned” today by the terrorist regime of mullahs in #Iran🇮🇷. What a badge of honor! pic.twitter.com/hgSivb3q74

This is Tehran’s response to a significant protest by thousands of PMOI/MEK supporters and freedom-loving Iranians in Stockholm, where speakers from around the world spoke after a recent Swedish court ruling sentencing former Iranian regime official Hamid Noury to life in prison for his role in the summer 1988 prison massacre of over 30,000 political prisoners, the majority of whom were PMOI/MEK members and supporters.

A global campaign against a covert prisoner exchange agreement with Belgium that aims to facilitate the release of the regime’s convicted diplomat-terrorist Assadollah Assadi and his three accomplices has been launched by the PMOI/MEK and their extensive network of supporters throughout the world. This has put Tehran in a desperate need to save face.

The National Council of Resistance of Iran (NCRI), a coalition of Iranian opposition parties,  will be the focus of the annual “Free Iran” rally held by the Iranian Diaspora on July 23 and 24. This gathering will call for further isolation of and sanctions against the mullahs’ government.

The resolute and unified stance taken by the aforementioned American dignitaries in response to Tehran’s sanctions is not only a humiliating setback for the mullahs’ propaganda machine but also amply demonstrates how helpless the regime is in the face of its opponents, particularly the NCRI, which serves as its main alternative and opposition.

Parallel to a global anti-appeasement campaign against Tehran’s attempts to have its diplomat-terrorist in Belgium freed, the NCRI coalition, with the PMOI/MEK as its key member, has made significant progress thanks to the Swedish court ruling regarding the 1988 massacre in Iran. Tehran’s response, however, is a political setback for the government and a reminder to the rest of the world of the real cause of the mullahs’ primary worries.