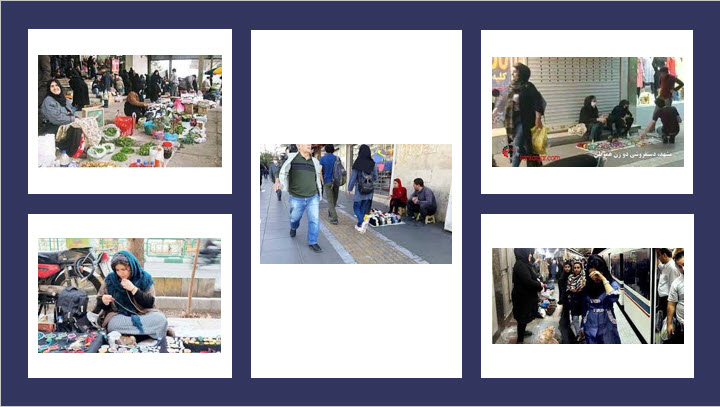 According to the Islamic regime’s Speaker of the Parliament, there are around 5 million women heads of households in Iran. Official data suggest that 52 percent of the 5 million women heads of households do not have insurance or pensions, which only reflects a small portion of the reality. 38 percent of these women belong to one of society’s three lowest socioeconomic classes.

Approximately 1 million people, or 19 percent of the population, do not get any form of social assistance. On January 25, state-run Asriran stated that Mohammad Bagher Ghalibaf, Speaker of the mullahs’ parliament, admitted that the 5 million women heads of households face a difficult economic condition.

On January 25, the fundamentalist regime’s parliament convened, revealing terrible truths about these women’s precarious predicament. He told in the conference that there were 1.2 million women heads of home in 2007, but that number had increased every year since then, culminating in a four-fold increase in the last 15 years.

In the meantime, 30 million Iranians are living in abject poverty. According to the state-run Pishro Daily on January 1, the number of persons living in semi-absolute poverty is presumed to be twice this number. The marriage of Iranian women and girls to non-Iranian males is another impact of poverty that is especially pronounced in border districts. Women have no rights in these marriages. The wives are unable to obtain birth certificates for their children since their husbands are foreigners.

Only 3 million women make up Iran’s 27 million-strong labor force. Discrimination in the workplace against women puts additional strain on women who are responsible for supporting their families. The primary carers, out of the 5 million women heads of households, experience the highest difficulties. This is due to the fact that they must work outside the home while also caring for their children.

As a result, most female heads of households are forced to work menial professions that hardly constitute paid work, such as peddling, porter-carrying, and housecleaning, to name a few. Low-paying professions are frequently physically demanding, resulting in injuries, premature aging, and burnout.

Children of women heads of household are also required to work to assist the family to survive under these dire circumstances. As a result, the number of underage laborers is rapidly increasing.

On the economic and social fronts, failure to pay attention to women heads of households creates irreversible damage. Women’s poverty vulnerability does not simply change as a result of social protection. As a result, the government must ensure that women have equal access to justice, land, and productive resources, as well as amenities. The easing of limits on women’s activities is also critical. These are essential components of a successful development strategy.

Unfortunately, in Iran, poverty has taken on a female face. The regime’s inertia, predatory nature, and misogyny have led to the current condition of women’s heads of families. And unless a democratic and independent system is implemented, nothing will change.

In an article the state-run Hamdeli acknowledges that the mullahs have gravitated towards “luxurious lifestyles” and “political and government positions” And they have seized important jobs in “the industrial domain, oil, sports, recreation, and even the meat industry”