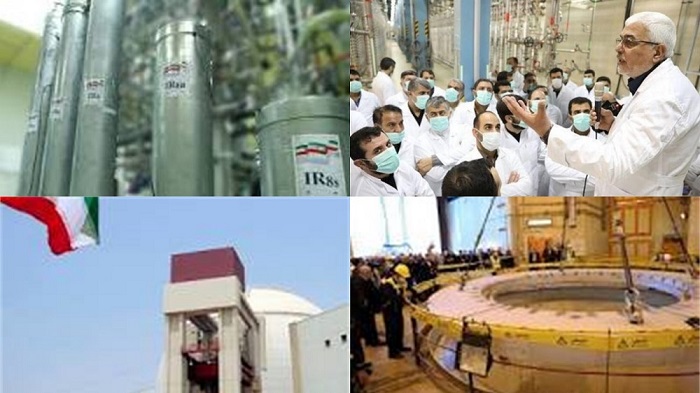 In a blatant statement made on July 18, Mohammad Javad Larijani, a senior official close to the regime’s Supreme Leader Ali Khamenei, said: “If we want to build a nuclear bomb, no one can stop us. We do not have permission to pursue weapons of mass destruction, including nuclear weapons, but if at some point we decide to do it naturally, no one can prevent us.”

“It is no secret that Iran has the technical capacity to create a nuclear bomb, but Khamenei has not made the decision to do so,” Kamal Kharazai, a former Iranian foreign minister and Khamenei’s top foreign policy advisor, said to Al-Jazeera Arabic on the same day.

These admissions coincide with Western powers’ ongoing efforts to resurrect the 2015 Iran nuclear deal, formally known as the Joint Comprehensive Plan of Action (JCPOA). As the regime keeps up its outrageous demands and nuclear extortion, these talks have come to a standstill in Vienna.

The JCPOA was designed to stop the Iranian regime’s illegitimate nuclear activities. Western powers made a big deal out of extending the regime’s “breakout time” to a nuclear bomb. Tehran, however, proved it had never adhered to the restrictions imposed by the agreement when it started undoing the actions it had ostensibly taken in the context of the deal in 2018.

The head of Iran’s Atomic Energy Organization at the time, Ali Akbar Salehi, stated in 2019: “They [Western powers] thought that they won the negotiation… But we had a countermeasure, and while we proceeded with the case, they didn’t achieve what they planned, and we did not become trapped in the enrichment deadlock.”

Tehran continued to act provocatively in the years that followed, producing uranium metal and enriching uranium beyond the level of 60 percent purity. Tehran took another flamboyant action, turning off all International atomic energy agency (IAEA) cameras installed at its nuclear facilities and threatening to do so until the JCPOA is implemented.

His remarks, however, were met with the silence of Western powers, who instead of applying pressure to the regime, tried everything in their power to salvage the deeply flawed deal by engaging in a never-ending round of fruitless negotiations with Tehran.

Instead of cooperating, the Iranian regime has continued its hostage-taking and nuclear extortion diplomacy as a result of its perception of weakness. Since Ebrahim Raisi became the regime’s president in 2021, Tehran has increased its nuclear defiance, with Raisi’s negotiators demanding things that were not even included in the JCPOA, such as revoking the regime’s Revolutionary Guards’ terrorist designation.

Iran’s ruling theocracy had invested in new administration policies in the United States. The U.S. was unsuccessful in “extracting any concession from Tehran,” not even “a meaningful freeze on progress toward the bomb,” according to the Spectator in January 2022.

However, dialogue with Iran’s theocratic government is still being pursued by the United States and its European allies. Tehran demanded more as a result of this attitude, as Larijani pointed out. “I believe that the slowing down in the JCPOA process will be quickly fixed,” he said, betting on the other side’s weak approach.

The Iranian people and the nation’s economic crisis wouldn’t benefit from sanctions being lifted against Iran’s terrorist regime, which would also receive a windfall of cash. Iran’s economic crisis is a result of the regime’s corruption, poor management, and incompetence. The world’s powers should be aware that making any concessions to the regime will only speed up efforts to build a nuclear arsenal and endanger global peace and stability.