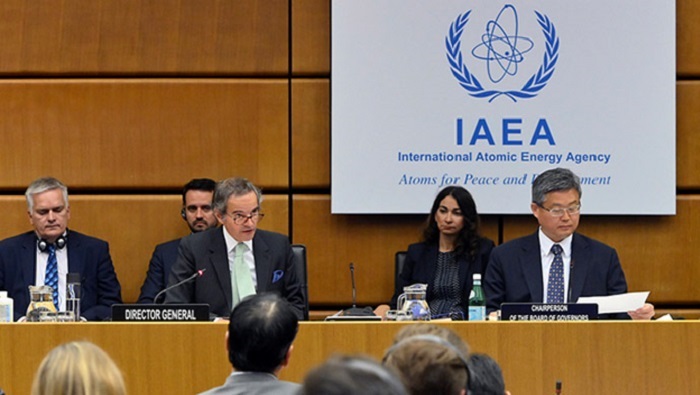 The text cites the IAEA’s unanswered questions and ambiguities about the regime’s contentious nuclear program, particularly three sites that the mullahs had not declared but where the IAEA detected uranium particles. The resolution also expresses concern over Tehran’s continued refusal to cooperate fully with the UN nuclear watchdog.

Iran’s regime has been using a variety of deceptive tactics to prevent an IAEA resolution from being tabled and adopted for nearly 18 months. Whenever the IAEA reported Tehran’s refusal to cooperate and the Board of Governors was about to issue a report, the mullahs would invite IAEA chief Rafael Grossi to Tehran with just days to go, make a minor concession in exchange for cooperation pledges, and kick the can down the road for another three months until the Board of Governors met again, repeating the cycle.

Despite Tehran’s threats and hysteria, the United States and three European powers are moving forward with the draft resolution this time. Of course, this text falls short of referring the Iranian regime’s nuclear dossier to the UN Security Council. Would Tehran be concerned if such a text were adopted?

IAEA DG Rafael Grossi said #Iran’s regime had failed to reduce concerns about violations of its nonproliferation safeguards agreement, will eventually cross the uranium enrichment threshold. #IAEA’s Board of Governors is to decide on decades of denial, deception & duplicity. pic.twitter.com/KAjGQpZtdc

Despite the fact that the resolution appears to be merely a warning, it does indicate that the West is considering a new strategy. Previously, the strategy had been to engage Tehran and make concessions while allowing the mullahs to continue their deceptive tactics. This draft resolution, on the other hand, indicates that the West has given up hope of reaching a nuclear deal with the regime and has taken a small step toward adopting a firm policy toward Tehran.

From another perspective, this resolution can be safely described as the first step toward the regime’s nuclear dossier being referred to the UN Security Council and reviewed under Chapter 7 of the UN Charter once more. The logic is simple: if Tehran refuses to respond to the IAEA’s questions and cooperate with the agency, the next Board of Governors meeting in September will refer the mullahs’ nuclear issue to the UN Security Council.

As a result, Tehran has three options at the moment. The regime capitulates and agrees to cooperate with the IAEA, fearful of the serious consequences of its nuclear dossier being referred to the UN Security Council once more. Given that answering the IAEA’s questions about the possible military dimensions of its nuclear program is the most important step in cooperating with the agency, Tehran must reveal all of its secret nuclear activities.

Tehran decides to keep fighting the IAEA and the international community. In such a case, its nuclear dossier will be referred to the UN Security Council in the coming months, potentially leading to additional US sanctions and similar European Union restrictions.

The mullahs decide to keep their deception going. However, given the previous 18 months of cat-and-mouse games and various tactics to buy time, if such an initiative were feasible, Tehran would have taken the necessary steps to prevent a draft resolution from being presented to the IAEA Board of Governors in the first place.

When Iranian regime Supreme Leader Ali Khamenei chose Ebrahim Raisi, known for his decades-long role as a mass executioner, to be installed as president last year, some believe the status quo was inevitable, if not obvious. Raisi was dispatched to deal with an increasingly agitated Iranian populace. Some argue that expecting Raisi to cooperate with the IAEA and the international community would be illogical.

#EbrahimRaisi's name is synonymous with awful crimes against humanity.

Not only did he mass murder thousands of political prisoners in #Tehran during #1988Massacre but he sentenced many inmates to amputation, lapidation, and falling.

Will the west still appease such a criminal? pic.twitter.com/2uvKRPNkVx

Although the IAEA Board of Governors’ possible adoption of a resolution may only serve as a warning to the Iranian regime, it is ushering Tehran down a winding road with troubling ups and downs.