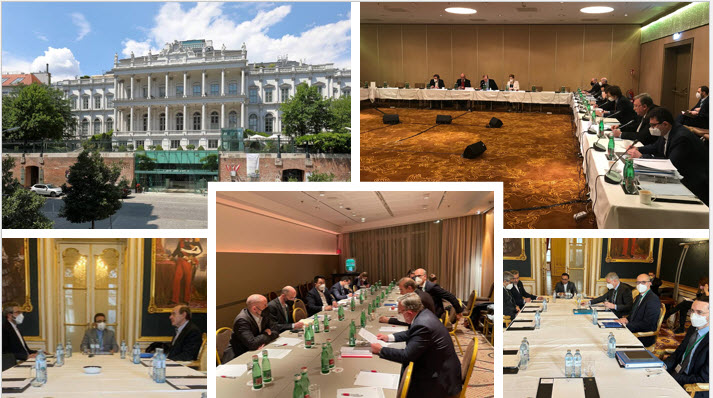 The Western parties to the 2015 Iran nuclear deal are in danger of breaking their prior vows that the talks would not go on indefinitely as negotiations over the pact’s future begin in Vienna. Following the new Iranian administration’s five-month delay in resuming negotiations in November, several American and European officials set an unofficial deadline of late January or early February for their Iranian counterparts to accept a compromise that trades immediate restrictions on their nuclear program for relief from US sanctions. Instead, Tehran has strengthened its stance, demanding immediate release from all sanctions as well as unattainable guarantees that no future administration will be able to abandon it as US President Donald Trump did in 2018. There is still little sign of progress in the nuclear discussions now that we have reached the unofficial deadline. Almost all negotiating parties have endeavored to maintain a positive tone, but the Americans and Europeans have been forced to reiterate that the window is narrowing and that fundamental gaps between the two sides remain.

The Iranians, for their part, have stated much the same thing, with hard-line Ebrahim Raisi mechanically repeating that a deal can only be reached if the US makes the “political decision” to suspend sanctions without conditions. Now that the unofficial deadline has passed, new speculation has surfaced about the likelihood of direct talks between Tehran and the United States. Given the current status of indirect discussions, however, such a meeting would almost certainly be interpreted by the Iranian government as evidence that the US is caving into Iranian pressure rather than the other way around.

Domestically, that image has deteriorated and will continue to deteriorate if the US and its allies insist on concessions in the nuclear talks in exchange for a significant rise in economic, diplomatic, and possibly military pressure. In January 2018, Iran was shaken by a nationwide movement that popularized explicit calls for regime change in more than 100 cities and villages, just months before Trump pulled the US out of the Joint Comprehensive Plan of Action. The People’s Mojahedin of Iran (PMOI / MEK Iran),  which Iranian state media had long worked to denigrate as a cult-like organization lacking the strength or popular support to challenge the mullahs’ grasp on power, was soon acknowledged by Supreme Leader Ali Khamenei.

Despite the fact that the movement ended after dozens of deaths and thousands of arrests, it sparked a series of interrelated protests that the President-elect Maryam Rajavi of the National Council of Resistance of Iran (NCRI) dubbed “a year of uprisings.” This prepared the foundation for a second, even larger nationwide movement in November 2019, with now-familiar slogans like “death to the dictator” being repeated in nearly 200 towns. Unrest has continued in at least some of those areas since then, and the regime’s internal warnings about the MEK’s societal influence have never stopped.

None of this has slowed the pace of action, which is expected given that 1,500 peaceful demonstrators were killed during the revolt in November 2019, only for new protests to erupt in over a dozen regions just two months later. In truth, defiance has only grown stronger within the activist community as a whole.

A statue of Qassem Soleimani, the notorious commander of the terrorist Qods Force, was set on fire a few hours after it was erected to commemorate the two-year anniversary of his death. On January 27, photographs of Maryam and Massoud Rajavi, as well as video excerpts of the latter speaking, were broadcasted on 27 state-controlled radio and television channels.

The fact is that the clerics are acutely aware of their vulnerability in the face of a disgruntled and enraged populace. In such circumstances, Western countries must resist extending another lifeline to the government and instead support the Iranian people in their fight for freedom.

An important factor is the low morale of the mullahs’ forces. This crackdown apparatus is losing its efficiency against the Iranian population’s growing outraged and determination.