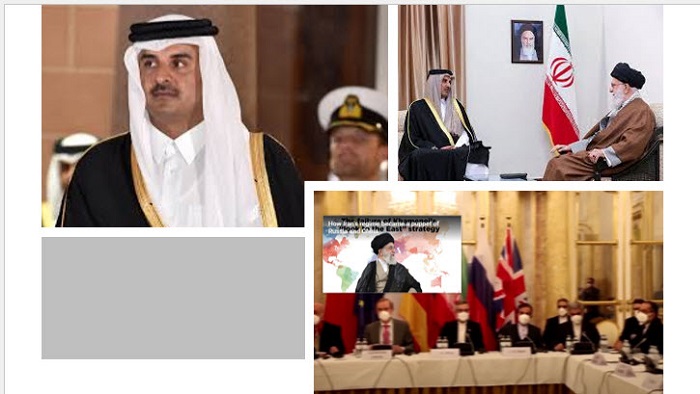 “First of all, such a take from the meeting is completely wrong. Secondly, it seems Al Jazeera didn’t practice enough precision in their translation and there are some negative intentions involved through the media,” said Iranian regime Foreign Ministry spokesman Saeed Khatibzadeh.

“[Khamenei] never raised the issue of compromise. Indeed, he told Qatar’s Emir that “we have always said that negotiations must yield results and not be a waste of time.” The Americans know what they have to do,” he added. With such comments, Tehran is once again kicking the ball back into the hands of the Biden administration, seeking more concessions.

As the nuclear standoff drags on, Al Jazeera’s coverage of Qatar’s Emir’s visit to Tehran and meeting with Khamenei sparked controversy. “A translation of this news report is circulating that the Qatari Foreign Minister has said the Iranian leadership has told the Qatari delegation, ‘We are ready to compromise on the Iran nuclear dossier.’

According to a report wired by the Tasnim news agency, which is linked to the regime’s Revolutionary Guards (IRGC) Quds Force, “this is clearly a completely false and devilish translation with certain political motivations.”

“Other Iranian officials have again emphasized that Iran, as in the past, seeks to reach a fair agreement that will return the U.S. to implementing its obligations. Despite all this, it has been months and years that the U.S. government has refused to live up to its obligations through greed and various pretexts,” the report adds.

As the saga unfolds, reports claim that Western diplomats are concerned about the Joint Comprehensive Plan of Action’s future (JCPOA). According to one European diplomat, each day that passes without an agreement increases the risk of losing everything that has been gained thus far.

On May 27, Mahmoud Ahmadi Bighash, a member of the regime’s Majlis (parliament) National Security Committee, said that the Iranian people should be informed about the truth that the nuclear deal will produce no results, emphasizing the regime’s fundamental differences with the United States and Europe, and vice versa.

Last week, a spokesperson for the French Foreign Ministry said the JCPOA is being held hostage by an issue unrelated to the nuclear agreement, referring to Tehran’s demand that the IRGC be removed from the US State Department’s list of Foreign Terrorist Organizations.

While thanking Mora for his visit, a spokesperson for the US State Department said an agreement is still uncertain. Iran must decide whether it wants to continue emphasizing non-JCPOA conditions or reach a quick agreement, per the official.

In Tehran, these developments are causing concern. In an interview with the state-run Fararu website on May 11, Amir-Ali Abolfat’h, an expert linked to the regime’s media apparatus, said, “Enrique Mora, or any other foreign official, who is attempting to end the Iran nuclear deal stalemate, should be more focused on Washington, not Tehran.” “The fact that Mora has recently visited Tehran and Borrell is voicing consent about the negotiations, in my opinion, are distant from the current circumstances regarding the Iran nuclear talks. The distance between the two parties (Iran and the U.S.) is quite significant and I doubt Mora will be able to achieve anything such as a quick development regarding the nuclear talks,” he added.