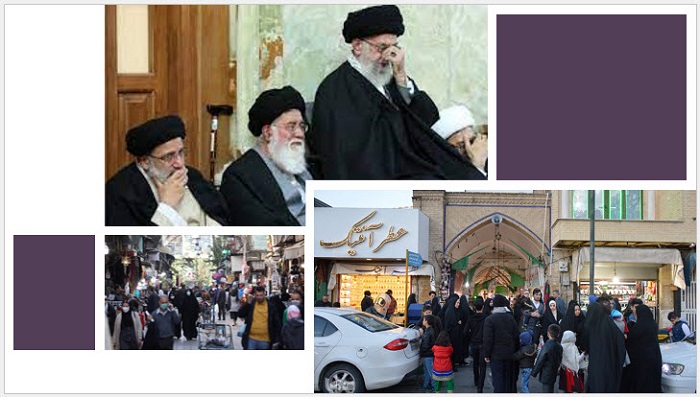 On March 21, senior regime officials in Iran began the Persian calendar year with promises to address the country’s economic woes. To date, we have seen nothing of the sort, and Iran’s financial woes are growing at an unprecedented rate. On the same day, regime Supreme Leader Ali Khamenei said, “throwing money here and there will solve nothing.”Ebrahim Raisi, the regime’s president, claimed to have performed “economic surgery” to bring rising inflation under control.

On March 24, he claimed to be responding to “the people’s expectations” to reduce inflation and improve the economy, saying, “The government should not become addicted to throwing money around.”

We have yet to see any economic reform, let alone improves, ten months into Raisi’s presidency. Senior regime officials claimed that money was not strewn about to control inflation and combat economic corruption. However, why has the bad situation gotten significantly worse and is now spiraling out of control?

Despite their claims, Khamenei and Raisi are eager to continue plundering the Iranian people in order to close the budget deficit. More people have taken to the streets in recent anti-regime protests as a result of high inflation, skyrocketing prices, and expanding poverty.

In economics, ‘splashing money’ around has a negative effect on a country’s production and growth. The uncontrolled banknote printing causes the importation of the most basic goods, halting many, if not all, production lines.

For countries with well-developed infrastructure and robust economies, ‘splashing money’ could have positive effects on the economy. Production generates revenue in such countries, resulting in economic growth and higher living standards for the population.

Therefore, ending state subsidies in countries with a strong economy and adequate infrastructure is seen as a positive step forward. The resulting revenue not only eliminates the need for government subsidies but also improves people’s living conditions.

However, eliminating Iran’s subsidies will only push the country’s poor people deeper into poverty and misery. We’re talking about a country where at least 70% of the population is poor, with 12 million people living in absolute poverty.

In an economy like Iran’s, eliminating subsidies for basic goods will result in rising inflation and skyrocketing prices. People’s purchasing power plummets, rendering them unable to purchase even basic food necessities.

Khamenei, Raisi, and the regime’s Majlis (parliament) Speaker Mohammad Bagher Ghalibaf decided to abolish the subsidized currency exchange rate, which would have saved them $8 billion in a single year. Money that was spent on their domestic crackdown machine and international terrorism. Prices of basic goods skyrocketed overnight, leaving millions of people unable to buy bread for their families.

Raisi’s boasting about major economic reforms and improvements has been slammed by even the regime’s own state media. According to a piece published on May 15 in the state-run Jomhouri Eslami daily, “the knife of this surgical operation is a knife that has long been stained, leading to increasing inflation, deepening rifts among society’s classes, and expanding poverty across the board.”

Khamenei and Raisi’s claim that they will stop “splashing money” into the Iranian economy is nothing more than them pursuing their main goal in the shadows while justifying their methods of stealing from the Iranian people.